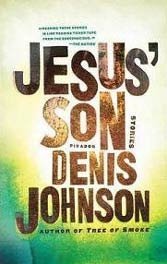 There’s that Polish neighborhood, “They have that fruit with the light on it, they have that music you can’t find.” There’s that car, “the little cubicle filled with the driver.” Both these lines come from “Dirty Wedding,” about a drug addict and his pregnant girlfriend at the Rebel Motel.

But in each of these 11 stories the words and people are made sick, their motives narcotic, smiles glowing with torture. Sure, tales of addiction form part of American literary canon, but Johnson advances the importance of “sixty-dollar Chevrolets” better than most: “It’s the kind you could bang into a phone pole and nothing would happen at all.” This is from “Work,” which sings the grime of vandals.

All the people here are cheap and banged out, suckers for more of the unwashed same. They get names like Georgie, Dundun, Jack Hotel. A life sign is a shriek. The first line of “Happy Hour” makes it clear where Johnson going, which wouldn’t really matter so much if he didn’t actually get there: “I was after a seventeen year-old belly dancer who was always in the company of a boy who claimed to be her brother, but he wasn’t her brother, he was just someone who was in love with her, and she let him hang around anyway because life can be that way.”

Life can be that way but few can transcribe it so well. First published in 1992; made into an inferior 1999 film.