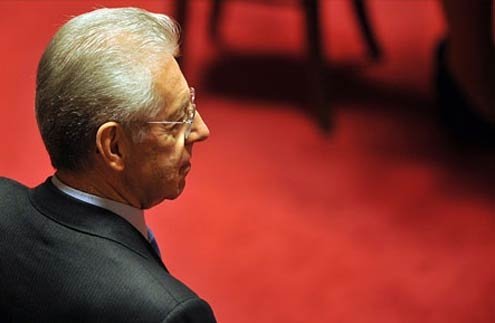 arely has political Italy endured such a nuclear winter. Talk shows have lost their bite. Political debate percolates but lacks snarl. Optimism and fatalism stand to joint attention but neither has a convincing spokesman. Since opposites were swapped, Mario Monti for Silvio Berlusconi, Italy’s slice of the Western front has gone quiet.

Objective explanations are cheap. Berlusconi was both frantic and antic, a lightening rod in search of thunder. His sidekick was Doberman caricature Umberto Bossi. Wrecking crews don’t come any slicker.

Bluntly, the entire Italian political scene was tied to Berlusconi’s Punch and Judy day-to-day. The symbols and cymbals of debate responded to his moods and malfeasance.

Some trawled for cliché, seeing Berlusconi as a noxious twist on Latin charm. Others worried that such Sun King introversion, cast into an unending love-him, hate-him divide, would impede necessary national repairs.

Cometh Monti, the literal brainchild of a quiet putsch.

Only time will tell how history assesses the soft-spoken prime minister for whom numbers are policy’s most loquacious etchings. In four months, he has effectively defanged a country that until mid-November believed it couldn’t live without nightly TV fistfights.

His streamlining measures, while unsettling unions, have deprived most polemicists of ideological ammunition. Not even caricaturists have him pegged. That’s in part because he stands for and preaches on behalf of the one thing Italians understand least: Country. His nonpartisan, vaguely royal approach has spread a narcotic aroma that has so far kept argument spellbound.

Winter’s typically vivid political drama has been canceled, replaced by a series of elegantly cogent statements about Italy’s national future. Both he and the man who appointed him, Italy’s President Giorgio Napolitano, possess the reassuring demeanors of good doctors. Whether Italy’s hordes actually believe a word of what Monti saying is something else again.

Monti is not just an esteemed economist but also a former university president, a graduate, or dottore, a classic Educated Man. His estrangement from party allegiances gives his elitism a non-ostentatious heft that harks back to the mid-20th century. He’s the kind of steady-handed man Italy’s uneducated classes once immediately referred to as capo, in deference to education, manner and dress.

Criticizing such a man is tantamount to dismembering statesmen-gentlemen archetype in the vein of Alcide De Gasperi, the dignified Christian Democrat still considered Italy’s postwar Godfather.

Only the Red Brigades briefly brought that class to heel, treating its members as over-privileged dregs, but such class warfare is long gone. Monti inspires deference by not asking for it. He supplies its expectation instead. It’s an implicit comprehension of authority that noisy, insecure politicians overlook.

The man in charge is not only a dottore but also a professore. Suddenly it’s 1955.

Then there’s fatalism, which exists in a separate, nearly oriental realm. By its rules, Monti can only fail. In this case fatalism teaches that no matter how thorough and well-intentioned the economic airbrushing, Italian culture and commerce is familial, based on parental guidance, and therefore immune to overhaul by Monti or anyone else. Leaders come and go but parents (and grandparents) stay. So long as they remain skeptical and resistant toward the idea of nation as a collective project, their children are also bound to perceive civic obligations a rung below those of family, keeping any true social compact out of reach.

Many Italians pay taxes but few conceive of the act as any more than updated fealty. Despite Monti’s best academic intentions, the greater good remains alien. Following the rules is an obligation that paradoxically carries with it no expectations. Transforming the longstanding state vs. citizen “war” into a working social contract would water down the life force that fatalism nourishes, and vice versa.

Monti has said he will continue to run the country for another year, when national elections are scheduled, after which he’ll return to his “country doctor” role as rector of Italy’s most prestigious economics university in Milan. By then, he hopes new economic and institutional priorities are in place as precursors to jumpstarting the Italian economy. He may yet succeed.

But if the nuclear winter makes one thing clear it’s that Monti, while the Western world’s newest Italian darling, is an exchequer on loan from a realm normally populated by loved and loathed town criers.

It’s a dimension of theatrical drumbeats and keening that jaundiced Italy has yet to show it can live without for any length of time, suggesting Monti’s country won’t stay winterized for long.