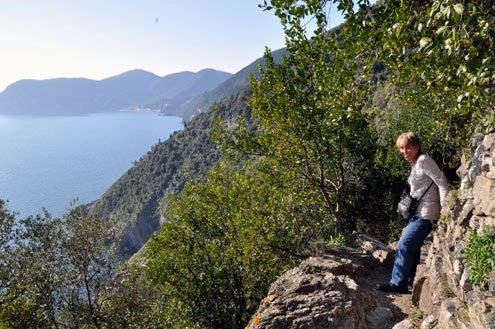 y grandparents and I expected it to be easy. We were in Liguria’s Cinque Terre, with its clinging villages, coastal cliffs and lush landscapes. And its guidebook-clutching, flip-flop-wearing tourists, who, like us, planned to hike the trails that are considered the region’s piece-de-resistance. They were billed as the only way to experience the Cinque Terre’s dramatic side, spectacular and scenic.

Nothing said they would be life-threatening.

Guidebooks did mention that the trails were rocky and narrow… which sounded like any other hiking paths to us. The only red-lettered caution was about summer, when the trails turned uncomfortably crowded. It was March. We thought we’d be fine. Besides, if thousands of people hiked these trails every year, how bad could they be without crowds?

We almost didn’t get a chance to find out. Late winter rains produced landslides that closed all the trails except for the famous Via dell’Amore. Wide, paved and flat, it took 20 minutes to get from one end to the other. We had two more days to kill.

In Corniglia, we got some advice from an Englishman who struck up a conversation with us at the top of one of the town’s long, steep staircases. “They’re not really keeping people from hiking the trails,” he told us. “In fact, the path from here to Vernazza has lots of people on it. And it seems fine.” The trail was beautiful, he told us, and so easy he’d done it three times that morning. “There’s one steep section at the beginning. But it levels out after, I don’t know, a hundred meters. Then it’s flat.”

My typically rule-stickler, seventy-something grandparents soon decided the “closed” trail was worth a shot.

Off we went. We followed signs to the little shack that marked the path’s beginning. A park ranger sat inside and watched us go past. “Be careful,” he called out us. And that was all.

We walked through shaded olive groves. It was beautiful and tranquil. No crowds, just the odd person or two coming at us in the other direction. All shined with sweat and leaned on walking sticks. They looked at us as if we were slightly crazy. I wore tights.

We should have known then what we were in for.

After a few minutes, the path turned into steep, stone stairs. “Here’s what that guy warned us about,” we said.

Each twist in the path brought more stairs. The sea views began receding. We paused to unpeel jackets and scarves. “Ah well,” we said, “the steep part must be almost done!”

A sign pointed the way down to a beach that we couldn’t see it from where we were. The Englishman’s advice began haunting us. Did he mean a few hundred meters vertically? We wished we’d brought more water. My grandmother started worrying whether we’d have time to finish before sunset. An hour had passed, or more. We hadn’t even tried to glance at our watches.

By the time the path “leveled out,” the incline to the sea had become a near-sheer drop. We edged through spots only just wider than our hips, one foot directly in front of the other. A misstep seemed lethal. Rarely were there rails.

With each careful step, we lost a little more trust in the Englishman, in guidebooks, in our assumption that guidebooks would never send visitors on such a dangerous path.

Two and a half hours later, we made it. A handful of twenty-somethings in flip-flops and bathing suits passed by us, starting the trail in the other direction. From their laughter, I had the sense they didn’t know what they were in for.

We fortified our jellied legs and nerves with drinks and pored back through the guidebooks. “It’s a fairly leisurely ninety-minute walk for the 4km on to Vernazza, with just a couple of difficult spots and the attraction of access to the lovely beach at Guvano,” the “Rough Guide” wrote confidently. “Ten minutes past Corniglia, toward Vernazza, you’ll see Guvano beach far beneath you,” Rick Steves said. “The scenic trail leads past a bar and picnic tables, through lots of fragrant and flowery vegetation, into Vernazza.” Ten minutes? Really?

We weighed the options. Maybe we’d passed into an alternate universe in which the trail we’d hiked was a different one from that experienced by the Rough Guide and Rick Steves. (Strange). Maybe the trail had been in worse shape than usual because it was, technically, closed. (Oops). Or maybe, just maybe, we’d been on the wrong trail — one of the tougher ones, that hadn’t been officially closed, hence the park ranger letting us continue. (Double oops).

Or, in a country where even driving can be an adventure sport, maybe we really had just experienced a “leisurely ninety-minute walk.”

We weren’t sure we’d ever find out. But for now, we were simply glad to have our feet back on a path that, if still narrow, wasn’t an inch away from a dive into the sea.