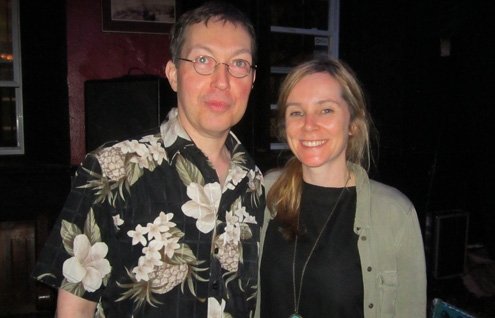 Canadian writer Jeff Bursey spent well over a decade trying to find a publisher for two novels he completed during the 1990s, a tedious and often demoralizing process faced by many first-time fiction writers. But the playwright and former parliamentary transcriber from St. John’s, Newfoundland finally saw his persistence rewarded. Since 2010, Bursey, now 53, has published both books, which remain as original and bitingly relevant as they were 20 years ago.

The first, “Verbatim, A Novel” (2010), is composed entirely of fictional documents originating from the parliament of a fictitious (and nameless) Atlantic province. Starting in 1992, Bursey started transcribing the Hansard, a daily transcript of events of the House of Assembly, the governing body of Newfoundland and Labrador, the easternmost of Canada’s 10 provinces (he took over its editing in 2003).

Stunned by the level of institutional ineptitude and by how “language was debased,” he began work on “Verbatim,” which is composed mostly of imaginary debates, letters, and emails that both illustrate and mock the ones he read while transcribing the Hansard.

Bursey’s second book, “Mirrors on which dust has fallen” (2015), burrowed into the daily concerns of his fictional province’s unusual inhabitants, often through fantastical leaps in sequence and logic. Sex scandals are plentiful, all too many involving children.

Bursey’s family has deep roots in the Atlantic Coast of Canada. Bursey was born in St. John’s and now divides his time between Prince Edward Island and Britain. Like his father, who still has a local radio show well into his 90s, Bursey worked in radio. He has written plays that have been performed in Charlottetown, on Prince Edward Island, while publishing criticism and scholarly articles in print and online periodicals in Canada, the United States and Britain. Bursey talked to David Winner about his life and work.

How did growing up on the Atlantic coast of Canada influence your writing? At some point early on I decided that the usual elements of fog, rock, ocean, sparseness, and so on, found in so much writing, even shopping lists, from writers in that region, wouldn’t be part of my work without a very good reason. It’s too familiar, and it’s too easy to substitute a description of nature for a stronger idea.

How did you come to work for Hansard? In 1990 I heard of a job opening as a transcriptionist at Hansard, which is something like the Congressional Record. At the time the position opened up I was working in radio, and it was a long commute. Hansard paid better and was physically closer.

By 1993 I had heard enough from the Members of the House of Assembly to want to get their language and concerns, as well as my concerns, into fiction. How was the question. Then I realized it had to be told in debates and letters, and a list of the members of my fictional legislature. Everything fell into place and I started writing. Finished the novel in 1995 and it came out in 2010.

In “Mirrors on which dust has fallen” you sketch Bowmount, the fictional capital city of your fictional province. Did you plan these stages? Having created a fictional city in this unnamed province I thought it would be economical and fun to use the same setting to talk about the people who might be affected by what their politicians decided.

Growing up I used to hear my mother say there were three things not to talk about at parties: politics, sex, and religion. I knew “Mirrors” would deal with the latter two, as well as show people working, so I decided to populate Bowmount and make the two volumes companion works. I could use some of what was referred to in “Verbatim: A Novel” if I wanted, but both books can be read without knowledge of the other.

I started writing “Mirrors” in 1995 so it’s close in time, creatively, to my first published novel, and I finished it in 1998 while still trying to get a publisher for “Verbatim: A Novel.” By then I thought I had two quintessential Canadian novels, but from this perspective that looks to have been ignorance talking.

You wrote plays before you wrote fiction. How did writing novels come to pass? Writing plays showed, to my delighted surprise, that I had some facility with dialogue. Plays require serious collaboration with other artists, and in 1984 I had a terrible experience with a troupe in St. John’s, Newfoundland that quenched my desire to persist with that form.

Then I moved, there were changes in my thinking, and short stories came next. Novel writing came about when a project seemed quite large, and I’ve always preferred reading novels to stories.

Canadian provincial politics figure in your work. Do you have strong feelings about Canadian national politics, as the Justin Trudeau era begins? Not so strong that I want to voice them publicly, considering that I work in a non-partisan legislative environment. But in a general sense, I could say that one of the motivations behind writing “Verbatim: A Novel” was to show, in an entertaining way, how we govern ourselves and allow people to draw whatever conclusions they wanted. That might make them more conscious of the process, and the process is more significant, ultimately, than whoever might be in charge.

How do you place yourself within the world of Canadian literature? I try and leave that to others. Some people have called me experimental and difficult, and if that puts me more, to use a simplistic U.S. example, on the [William] Gaddis side rather than on the [Jonathan] Franzen side, that would be fine.

You’ve just been on an extensive reading tour, and there’s a wonderful monologue on your web page. What role can performance play for writers? It’s risky, especially if they’re nervous, uncomfortable or bad at it. If someone doesn’t feel it’s right for him or her, then it should be left to the side. Before I wrote plays I was in them, as a pretty poor actor, but I liked the performance aspect, and radio encouraged that. Now, when I get up to read, I simply try and embody the narrative voice of the novel or story. There’s me, and then there’s the “me” acting as something else.

If we think of how recently oral storytelling was highly regarded, and how it is valued in certain places today, then we have to accept that performance never dropped out of sight. It just might not be fashionable or something people get to see early on as much as when I was young. It can certainly enrich an evening. At times I’ve invited other writers to take part with me, read some dialogue, say. That changes the dynamic while giving the audience something else to focus on. [It becomes] more about the writing than me… and the writing is what stands the better chance of lasting. I should try and give it as much of a boost while I can.