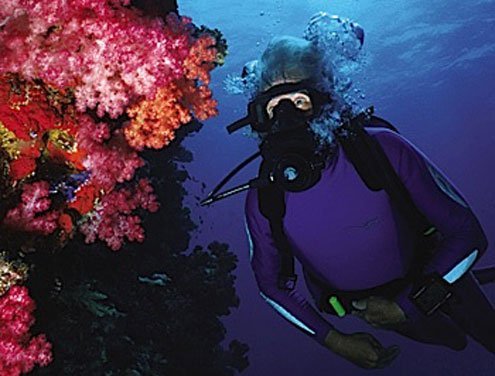 Cousteau is still very much at home under water at 66. Copyright photo by Tom Ordway.

Frenchman Jean-Michel Cousteau got his first taste of the sea at age seven when his father strapped newly invented SCUBA gear to his back and tossed him into the water. His father was Jacques Cousteau, arguably the most famous ocean explorer of the 20th century, and captain of the Calypso, the well-known vessel that appeared in the popular television series, “The Undersea World of Jacques Cousteau.”

Long ago, the younger Cousteau followed in his father’s footsteps, becoming an explorer, environmentalist and filmmaker in his own right. In 1999, two years after his father’s death, Cousteau founded Ocean Futures Society, a marine conservation and education organization, based in Santa Barbara, Cal. He serves as a spokesman for the environment, conducts research, runs marine education programs, and has produced 76 films — winning an Emmy, a Peabody and the French Sept d’Or.

Now, after nearly four decades in America, the elegant 66-year-old is turning his attention back to Europe, and in particular, to Italy. He has opened a new foundation, Ocean Futures Society Foundation Italia, in the northern Tuscan city of Lucca. From Lucca, the group will recruit volunteers, conduct research and raise funds. This spring, it will open the first in a series of camps for children off the Tuscan coast. At these camps, which Cousteau already runs in other countries, children learn how to dive, snorkel, garden organically and kayak, while at the same time gaining a greater awareness of nature and how to sustain it.

Stephanie Gruner spoke to Cousteau about the organization’s plans in Italy and his environmental concerns.

Since you are founding an organization to broaden awareness of the sea and reach youth, how do you approach them regarding the recent disastrous events in South Asia?

If you are speaking to the affected, they need to be taken care of. Some of them have lost their parents. They have been displaced. Unfortunately, there has also been horrible trafficking, in which young people have been sold in the midst of the emergency. Many people are in shock. They must be rehabilitated. As far as the rest of youth on the planet, the unaffected, a lot can be learned. Nature is in charge. In the case of a disaster like this — and it will happen again — we can’t forget that just because natural events move slowly they are still dynamic: continents are drifting, they are moving: The Earth is alive. It cracks and breaks, and it creates situations like the one we just endured.

Because of the technical capacity of the human species we can in many instances anticipate these problems. But this capacity has been reserved to rich countries. Sadly, I think this catastrophe could have been avoided to a great extent by having technology that could forewarn us, and them, in those countries, about the arrival of a tsunami. I live in California right now. I knew about the catastrophe that was going to take place before they did. Something’s wrong with a system that permits that. The international movement to assist people — which is moving, more moving than anything I have ever seen — will change that. We will have the same warning technology made available to the poor. That’s the positive side of a catastrophe. The solidarity is the most peaceful expression of the human species that I have ever experienced.

What should kids know?

Again, they must understand that nature is in charge, that more than 70 percent of the planet is covered with water; they have to know that the quality of our lives is completely linked to the quality of water: No water, no life; bad water, disease.

Does the creation of this foundation in Italy suggest a renewed focus on Europe and its environmental issues? Yes. It’s a renewed focus on Europe, and more specifically on Southern Europe and the Mediterranean Sea. Why the Mediterranean Sea? Because it really is the cradle of human civilization. It needs a lot of attention because it has been abused.

Why base this foundation in Italy?

There are two reasons. One is opportunistic. We had an opportunity to do it. [Editor’s note: Francesco and Vivien Arcoleo, longtime friends and travel companions of Cousteau, as well as Lucca residents, are behind the project.] The other is philosophical. And that’s obviously the one that drives everything. I’m from the Mediterranean.

Can you talk about any pet causes you plan to focus on from Italy in the near future?

I’d like to make people more aware of what’s happening with the Mediterranean Sea, related to introduced species. There are between 1,200 and 1,500 species that are introduced either by vessels that can come into the Mediterranean through the Suez Canal and of course, Gibraltar. Why? Because the temperature of the water has increased. And it makes it more favorable for tropical species to show up. And they are proliferating. They can eliminate the endemic species. It completely disrupts the food chain. And the question is, “Is that a catastrophe?” “Is it good?” “Is it bad?” I am firmly convinced that diversity is synonymous with stability. The more species you have, the more nature can take punishment, whether it’s nature’s punishment or man-made punishment. So it’s a little bit like removing the rivet of an airplane every time you remove a species. The plane is still flying, probably doing okay, but there’s going to be a time when you remove one too many of these rivets and the whole system is going to collapse.

How receptive are Europe’s leaders versus America’s leaders to listening to these kinds of arguments?

It’s very different in the United States. The Europeans are carrying a very heavy load of culture, which always gets in the way of the decision making process. And when I say it gets in the way, I don’t mean it negatively. It has to be taken into account. You cannot build a new building if you’re on the foundation of a historical place. The United States doesn’t have to deal with these issues. Because the United States virtually has no history. And 200 years or a little more is really no history in the history of the human species. The processes in the U.S. are a lot easier, faster, and obviously more efficient. At the same time, the preservation that Europe is doing of its own past is so important. Culturally, from a philosophical, and a spiritual point of view.

And does that translate into a willingness to preserve the environment?

Yes, it does. And it’s usually much more deep-rooted than it would be in the U.S. So it sounds like a paradox, but it’s not. On the one hand, you can do things in the U.S. real fast, sometimes maybe too fast. Sometimes, not at all. In Europe it takes more time to make a decision. When a decision is made it’s very solid. And it stays.

Can you give me an example of a situation in which you have worked with particular countries or particular leaders?

It was two years ago that the [oil tanker] Prestige sank off the Galician coast. This is perhaps one of the top two or three fishing grounds for the fishing industry. The Prestige … requested assistance and was told to go away. It ultimately broke apart and went down to 3,000 meters of depth, leaking oil — they had 65,000 tons of oil — and it is still leaking today. So the entire northern coast of Spain was affected. I went there over Christmas and New Years [2003]. And I could see that not only was it an environmental catastrophe, but it was a social disaster. Probably 50,000 people or more have been affected by it either because they lost their jobs, or the tourists didn’t show up, or the fishing industry had to stop, or the people who sold fish in the market could not do it. I mean it was chaos and probably still is. It’s not just the poor birds and fish and whales and dolphins and what not. There are social consequences that are very dramatic and very long term.

You have divorces on the increase, consumption of alcohol and drugs on the increase, people moving away. Families being torn apart, partnerships being dismantled. And nobody has really focused on that aspect. What does it do to people? We spoke with people there. And we filmed this. One has to really understand that unlike what was believed in the 1960s and 70s — when environmentalists were looked upon as a bunch of hippies — we have to understand that we’re talking about the economy here, we’re talking about the quality of life, which is directly linked to the way we manage our resources. As a result of this catastrophe and the poor management by the previous administration in Spain, the European Community is very much trying to create new laws that would keep those kinds of outdated vessels away. And not allow them in their ports. So that’s a positive thing. But it often takes a catastrophe for these things to happen.

Your organization has opened these marine camps for children in France, Spain, and you have plans to open more, including in Italy. What is the goal of these camps?

The goals, and hopefully there will be plenty more in Europe, is to form ambassadors, young people who, as they grow up and become leaders, will be in a position to make much better decisions than our present leaders. And that’s the world over. I’m an exception in the sense that I grew up in it. But most people haven’t had that privilege. And, so we are running the planet without understanding what effect we have on the life support system, which is water. So the more we can reach young people out there, the better off the planet is going to be.

You have a son and a daughter. Do you plan to pass the torch to them?

I hope they want to pick it up. It’s very different than trying to force things to happen. My dad never pushed me and I never will push my children.

For details about the Ocean Futures Society Foundation Italia, call 0583.583.640.