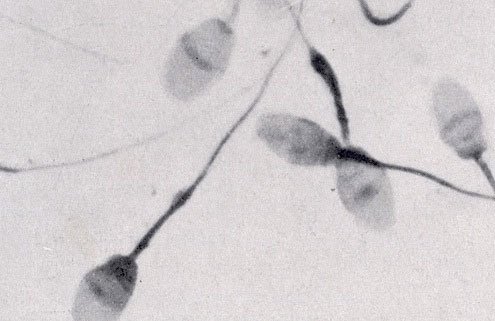 You might be humbled or made to feel less like the center of the universe by a hot celestial body.
T

his week, the following items of interest: Sperm over 50, conclude doctors who study such things, loses the plot. It forgets its lines and bumps around like a deaf and blind man — senile, with a cane. On a bad day it could engender a howling madman. Or worse still, a taciturn one.

“What we’re saying,” explains a doctor called Eskenazi, “is that men, too, need to be concerned about their aging.”

“The message to men,” snaps Pamela Madsen of American Fertility Association, “is: ‘Wake up and smell the Java.’”

Next up is the Narcissistic Personality Inventory. This is a test devised by an American university to determine if the teenaged ego is overly inflated. Take the test and you’re asked to respond to such statements as, “I like to be the center of attention” and “If I ruled the world, it would be a better place.”

The answers told San Diego State researchers that college students suffer from “elevated narcissism.” Or that the 17-to-20-year-old world is a wildly selfish place.

“I’m concerned,” said a professor named Jean Twenge, “that we are headed to a society where people are going to treat each other badly, either on the street or in a relationship.” The way Madsen treats aging sperm. And one presumes she is not a narcissistic, not a teen.

There is also an item that explains progess in “Blog Sex” and another about the potential perils of staring too directly at a lunar eclipse — among them being made to feel less like the center of the universe by a hot (or too cool) celestial body.

Complications from downtime narcissism are insidious.

You think, therefore you worry.

Instead, we rode our bicycles to the bad side of town that lay across the park, north and east. Blacks lived there and we were scolded to avoid them. We never did what we were told.

Our idea was twofold. The first involved preening our bikes — I had a red Sears&Roebuck Flyer — the second was to watch a horror movie, which on Sunday were screened only in the outlawed neighborhoods.

So to see “Blade of the Black Dawn” we’d bike into this menacing Congo. I liked the words Congo and Brazzaville, which I’d picked up from my father. I added Biafra by myself, from the headlines.

You could say we were empowered. Or that we were acting out our non-parental agenda. In any event, we commanded out inner boy, because we were boys, and pedaled hard.

What you should know about the teeming Congo and about “Blade of the Black Dawn” is that both were overrated. Certainly the warnings were. We’d park our bicycles and walk up the main street — three very white boys — and were greeted with… indifference. Nothing happened. Not at the drug store, where we bought sour cherry gum and taffy bars. The clerks nodded. We nodded back. We said “thank you.” So did they. The man who sold us tickets was also black, Charles, and he admired our bikes. He also said, “If you get scared in there I’ll come in and get you…”

The Blade of the Black Dawn (not a very large blade) was a kind of scythe that medieval knights dressed in ghoul suits wielded on the unsuspecting populace, hoisting severed heads on spears and tossing them into black sacks. At one point a village girl (unaware of the fuss) kissed a marauder — absolutely unnecessary, if you asked us — and we saw a vaccination mark. We told Charles about it and he laughed. “Hey, we just put up there. It’s you boys gotta choose ’em…”

About 20 years ago, according to the San Diego State report, American nursery schools established “self-esteem” programs. They recommended that toddlers sing songs with the lines: “I am special, I am special. Look at me.” It might as well have been Balkan nationalism.

Charles, unmindful of the protective future, told us just the opposite. We were nothing special. Just white boys on a Sunday. Poor us. He laughed again. We had nothing to fear in his Congo unless we wandered on its wild side. “Every lining’s got its not-so-silver part.”

Maybe it disappointed us, that we were shortchanged by menace. Maybe we yearned secretly for alarm and admonishment: from the Congo, from the Blade of the Black Dawn. Maybe someone should have told us that our each haphazard move might hurt us, or be our last, or that our sperm was already busy dying out. Maybe.

But no one did. And we got on with it.

I recall Charles’ smile and the vaccination mark, the tasty taffy and the bony bikes. I remember the murders of Martin Luther King and Bobby Kennedy. The Congo burned to ground and stayed charred for years.

We kept our Narcissism Personality Inventory well-stocked. It consisted of awkwardness, ambition, and movies, of some dares accomplished and most not, of unentitled risk and the thrilling wind that speed visits on the willing few. We wore no helmets, a bad thing that the bike-aware future would look into and legislate. The future would also get around to tackling taffy, which marred tooth enamel and was removed.

But what it settled on for keeps was fear itself, forever foraging for Blades and Black Dawns while never bothering with the movie, the vaccine.

Dated sperm conceiving a brittle present that trades bike adventures and the Congo for an illustrated catalogue of crash positions.