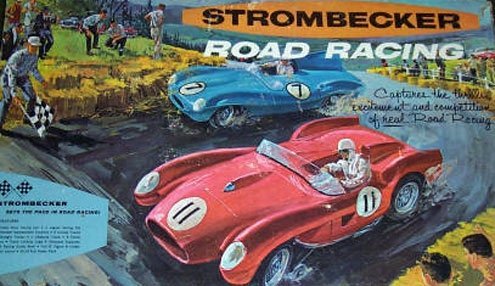 Having a road race set meant explaining how it worked to your father.
J

ason, the 11-year-old boy to whom I’ve just been introduced, does the following things. He stares at me blankly and says “hello” in a nearly inaudible tone. I extend my hand, which he looks at, as if he’d never seen before seen such a hand. He does nothing with it. “Shake the gentleman’s hand,” says his mother, but Jason leans back on the couch and stares elsewhere, like a Romantic poet lost in thought. But there are no poems. Instead, there’s a device and he burrows into it, his thumbs jiggling. He is present but absent. “You know kids,” says his mother, shrugging.

Later, Jason’s mother compels him to show me his bedroom, which is mostly empty aside from a bed, closet and video console. There are no posters. There are no sports pennants. There’s a photo of a bulldog. “It’s a cool dog,” Jason tells me. I ask why. He says nothing.

Jason’s mother tells me her son likes ancient Rome so I mention the Coliseum. “Cool,” he says. “Gladiator.” He stops there.

Later, sitting with Jason’s mother, I think back to age 11, an only child in a household of three (mother, father, son). I most remember drawing ships, climbing trees, thinking, and staring into space.

My father had a friend, a retired Yugoslav colonel, who’d come by and tell tales of World War II in great and vivid detail. I was mesmerized. I asked him the size of the guns and tanks and why cities on hill were harder to attack than cities on the flatlands. I also wanted to know about what kinds of planes the Yugoslavs used, since my model-building war included only Spitfires and Messerschmitt and P-51 Mustangs. I spent hours talking to the colonel.

Alone, I’d park in the basement to build my models or assemble my road race, whose configuration my father demanded I explain to him (“If I buy it for you, you have to tell me how it works, and who wins…”). Brooding wasn’t allowed (“It’s bad for you. Speak up!”)

Sometimes I’d venture to the back porch where I played an invented game that involved throwing a tennis ball against a wooded wall in which I split myself into two people competing fiercely against each other. The judges (the crowd of inner me) decided if the bounce was nifty or dull. I kept score (first to 10 won) though I don’t remember just how this scoring went.

When my parents invited the Adams’ to dinner my special task was to ask Mr. Adams questions about his job — he was a lawyer for the U.S. Army — and make sure to be polite to Mrs. Adams, who had just had an operation. At one such dinner Mrs. Adams, a librarian, explained that dinosaurs were reptiles and couldn’t vocalize outside a specific range, and that their brains were too small for cognitive reasoning, which sounded a lot like something to do with politics. Still, I never guessed Mrs. Adams knew so much.

Jason’s mother interrupted this time travel by suggesting I check back on Jason. “I’m sure he’ll be glad to see you before you leave.” He’s not. He’s in front of a console. His fingers are twitching. He wears ear buds so he can’t hear me. Finally, I tap him on the shoulder. He leaps, surprised, and glares at me briefly. I see figures on the screen. They’re armed and charging, as if they want to charge out of the console. But Jason is having none of that. He obliterates them, their video blood and detailed innards trickling down the screen. He’s then ready to start again. That’s when I leave.