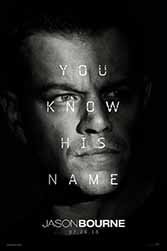 Give “off the grid” assassin Jason Bourne (Matt Damon) a morsel about his murky past and you know he’ll just kill for more. Here, all it takes are a few provocative words from a trusted old friend — who of course is promptly murdered. That’s reason enough for director Paul Greengrass and Damon’s Bourne to go into full-throttle mode.

When it comes to pacing and location, Greengrass is as nimble as they come. Bad guy CIA Director Robert Dewey (Tommie Lee Jones) anchors the Washington action, while hunted hunter Bourne skips from Rome to Berlin to Athens to London to Las Vegas, where the climax plays out.

Damon’s laconic Bourne may be a little longer in the tooth, but remains true as ever to the “next bullet’s in your head!” spirit of action flicks. Also in the mix are a Mark Zuckerberg-styled “social media giant” in uneasy cahoots with the Feds, a kill-anything assassin (Vincent Cassel) who murdered Bourne’s father (the past is revealed), and an insidious CIA operative named Heather Lee (Swede Alicia Vikander) whose presence opens the door to further Bourne installments. No one is fleshed out and the details of Bourne’s past abbreviated into blurted bites (“I volunteered because I thought our enemies killed my father. I volunteered because of a lie!”)

Greengrass cares most about places, faces, and grudges, which he promptly drenches in adrenalin and sets alight. By the time pyre rises (the close-out Las Vegas chase scene) the characters are dormant. Greengrass’s early Bourne films — 2004’s “The Bourne Supremacy” and 2007’s “The Bourne Ultimatum” — often gave his antihero pause for thought and feeling. Those days are as gone as partisan restraint.