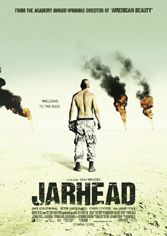 No arguing that director Sam Medes (“American Beauty”) is sincere. To what end is unclear. Jake Gyllenhaal is Anthony Swofford, a real-life Marine who wants action but never sees it. This becomes a movie about the perils of tedium — in the vein of Dino Buzzati’s novel “Desert of the Tartars,” in which the soldier Drogo gradually goes mad awaiting heathens who don’t won’t or can’t appear. Here, it’s Marines (pre-Gulf War) who lose it. Or lose their way. It’s “pretty” to look at — sweeping deserts are, that is — but finally a dismaying exercise in repetition. The Boot Camp section is edgy and promising but falls short of Kubrick’s take in “Full Metal Jacket.” From Swofford’s book of the same name.