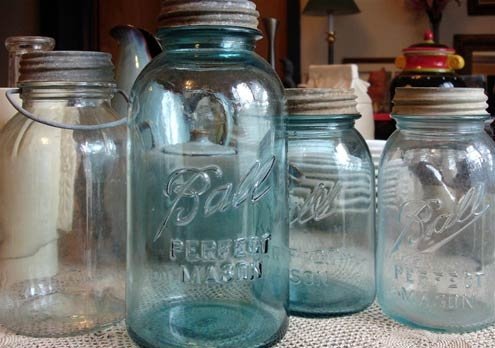 Jars are the name of the anti-waste game.
A

few days ago, I noticed I was changing garbage bags for the second time that day. The recycling bags were filled to the brim. It suddenly hit me how far we were from Béa Johnson’s Zero Waste Home philosophy. Béa’s blog swears by the slogan “Refuse, Reduce, Reuse, Recycle, Rot.” A French expat artist in California, Béa decided to try to run her household without relying on any kind of packaging.

Her slogan in mind, I decided to try no waste for a week. If they could do it in California, why couldn’t we do the same in Rome?

Before going shopping, my wife and I sat down to figure out how we could put our life closer in synch to that of the Johnson family. Our apartment has a minimalist look, a good start. But when we opened our hall closet, all kinds of papers, ribbons, bows spilled out.

“What do we do with all this?” I asked her, somewhat ironically.

“Just recycle the wrapping paper,” she replied. Something in her tone gave me a sense of nostalgia for the days when we still had parties at home. A small child can make those days vanish.

I then checked out all the products stowed away in my kitchen cupboards. Unwittingly, we seemed on the right track. I tend to buy products such as chickpeas, lentils, barley, dried beans, and flour at the market or at health food shops. I just needed to remember to bring along the containers where I kept them (mostly from IKEA).

I pick up my coffee only at international food retailer Castroni, so that, too, would just be a matter of taking along the container. As for spices, I buy them by gram, jealously putting them in a cupboard, once again in their separate containers.

In theory, I could buy local wine from a tap, but I’m more of a traditionalist. I like to uncork the bottle and sniff the cork. It’s a fascinating and indispensable ritual.

Cheeses, worth their weight in gold, I buy from a Testaccio shop called Volpetti. (If you ever go there, savor all you can. The shop has a seemingly endless array of delicious Italian and global cheeses.) Even with cheeses, it would just be a matter of bringing along airtight sealable glass jars, without letting the clerk add plastic wrap.

As soon as the opportunity arose to go shopping, I put together a bunch of sealable glass jars (often called canning jars in Europe), some cotton bags, and a few heavier cloth ones. I headed for the fish stand inside the Carrefour supermarket where I decided to buy three medium-sized squid.

Here’s where it got tricky. When I gave the glass jar to the fishmonger, a long pause followed. Finally, the fishmonger said, “Listen, I get that this is for a science experiment, but you should know that my nephew used bream, which costs a lot less.”

I started grinning ear-to-ear and explained the hows and whys of the airtight glass jars and their low environmental impact. After my speech, the fishmonger, still not entirely convinced, put the squid in the jar.

I then headed for the local fruit and vegetable market. Amazingly, I found a bunch of women with their own reusable shopping bags. In general, market food is sold in brown paper bags, which shoppers then put into their trolleys to take home.

Next came the butcher, where I decided to pick up some diced rabbit meat. I gave the butcher a glass container with a pressure lid. The butcher stared straight at me and asked if I was an animal rights activist. Trying not to laugh, I went over my explanation. The butcher relaxed and told me that he’d once had a run-in with an American client from California, apparently a member of an animal rights group, who called the police on him for displaying a festively decorated pig with its head on a platter. The complaint led to his business (and livelihood) being shut down for three months.

“I just wanted the window to look more attractive,” he said, and I nodded. “I never dreamed of coming face-to-face with a crazy American who goes nuts seeing a pig with its head on a platter.” After the outburst, he said I was doing him a favor: Putting the rabbit in the jar saved him wrapping paper.

Finally, I went to pick up half-a-kilo of gelato, giving the vendor yet another glass jar and lid. As soon as the gelato vendor saw the jar, he came up with his own priceless comment: “Okay, I’ll put the gelato in the jar, but don’t even think about a discount…”

All in all, my Rome experience suggests that it’s perfectly possible to live an environmentally friendly lifestyle. I have a friend who claims to live a zero impact life. Then again, he’s single and 40. When I told him about my odyssey and asked him how he did it, he didn’t miss a beat: “I just eat at my mother’s place in the same building.”

This linguine dish gets it name from cart-pushers who were eager to have pasta while on the go delivering products. It’s based on easily stored ingredients.

— In a skillet (it should be large enough to contain the linguine at the end) place the oil and garlic, and heat. Add the clean and sliced champignon mushrooms as well as the dried mushrooms, previously soaked in warm water and wrung out.

— Cook the mixture together and combine the chopped tomatoes, seasoned with salt and pepper. Cook for about 10 minutes. Once the sauce is ready, add the oily tuna.

— In the meantime, after having cooked linguine in boiling salted water al dente, drain it and mix it in a pan with the sauce. Whisk, stirring with a wooden spoon to ensure the ingredients are well mixed.

— Before serving, sprinkle with chopped parsley.

A delicate white wine brings out the best in this dish. Try a Vernaccia di Oristano, by Contini.