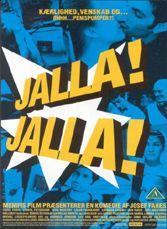 When upbeat reggae paces an opening scene where two young men argue over picking up dog crap in a local park you know you’re onto something. Lebanese-born Swedish director Josef Fares fills his breezy low-budget flick with family-members and a few young Swedish actors, giving both film and story-line a genuine feel.

Roro (Fares Fares) and Måns (Torkel Petersson) are confidants and coworkers. Måns is Swedish while Roro’s family is Lebanese. Carefree life comes to an abrupt halt when Roro’s father informs him his family has selected his future wife. Månsm, meanwhile, is having problems with his sexual orientation.

Whenever Roro and Måns try to get things right they botch them. It’s the way they fail that’s hilarious. “Jalla! Jalla!” works because it dodges the kinds of cultural stereotypes indulged in by films such as “East is East” and “Bend it Like Beckham.” It approaches solemn themes — old habits colliding with new traditions, the existence of separate cultural realities — with a lighthearted touch. The movie, like the sunny days Roro and Måns inhabit, is a breath of fresh air.