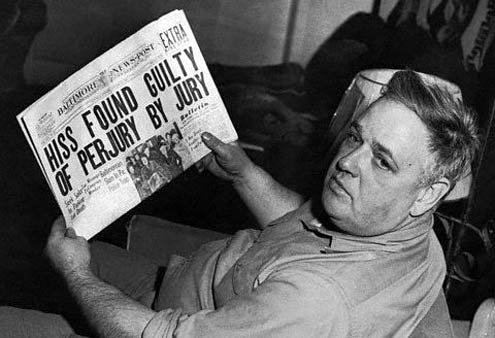 iding the nationwide success of her timely “The Age of American Unreason” and its 2009 “Post-Election Update,” Susan Jacoby has rushed to publish a further attack on the insidious effects of unreason for a democracy. Here’s “Alger Hiss and the Battle for History” (Yale University Press, “Icons of America” series, 2009).

The good news? This is an even more cogently argued and compelling book than its predecessors. In part because it keeps to a clear book plan. Battle avoids the historical hopscotching Jacoby so over-enjoyed in Unreason. Plus, it assails irrational ideologies without her earlier, tiresome sarcasm and her lunatic-fringe baiting.

Of course, the title is a little uninviting. Maybe you’re mumbling: “Remind me! Who was Alger Hiss, exactly? Wasn’t there some Pumpkin Patch Puzzle? Whatever can this half-century-old story possibly mean for third millennium Americans?”

In Jacoby’s reconstruction, the Hiss case and its decades-long aftermath become an iconic warning to a democratic society. It reminds of the destructive force of overheated opinion and irrational rush to judgment.

It’s 1948. Hiss is an ex-State Dept. employee and now head of the prestigious Carnegie Endowment for International Peace. In the immediate aftermath of World War II the United States is gripped by fear of Soviet Russia and the “Communist threat to take over the world.” It’s an obsessive concern whipped into panic by politicians and media. Suddenly, any American who has been enticed or merely intrigued by the Marxist promise of a brave new world may be suspected as traitorous Soviet agent.

Congress opens the powerful and greatly feared House Committee on Un-American Activities. Also acronymed as HUAC, this congressional group will soon link to investigations led by Senator Joseph McCarthy, and function as wildly unregulated witch hunt for: “Commies”; “fellow-travelers”; “left-wing sympathizers”; and the soon-denigrated, ambiguous and fluid category of “liberals.”

As result of a political (and personal) break in relations, Whittaker Chambers becomes the first HUAC witness to formally name a major public figure, like Hiss, as Soviet spy. A respected editor at Time magazine, Whittaker shocked his HUAC audience when he added that his ex-comrade in the American Communist Party had actually stolen our classified atomic secrets for the Soviet Union. Public uproar. Mass hysteria. Commie spies may be lurking on any corner. Hiss goes to trial. And the proof of his theft and betrayal?

Here’s where enraged public opinion and slapstick comedy combine in the now infamous Hiss trial. As Chambers told the House Un-American Committee, he turned anti-communist and quit the party. And decided not to play middleman in the Hiss plan. Which was: to transfer microfilmed copies of atomic secrets to Soviet agents.

Seems Whittaker C. had long grown a pumpkin patch in his Maryland home backyard. To safekeep the top-secret microfilm and return it to the government, Chambers bizarrely hollowed out one of the orange gourds in his backyard garden, and hid it there.

His shocked HUAC audience moved swiftly: FBI agents immediately accompanied Chambers to his home garden to get that pumpkin. But as Chambers and the FBI soon learned, one pumpkin in a patch really does look just like every other pumpkin there. In growing distrust and doubt, one agent asked Chambers: “So what is this, Dick Tracy?”

Through a long night, the buffoonish, tragicomic pumpkin hunt continued. Until the microfilm-rattling gourd was located. Dailies headlined: “The Great Gourd Escapade” and “The Pumpkin Patch Peril.” Pretty funny? Yet the accompanying articles were dead serious. And no authoritative voice, and no member of the public laughed. That was the tragedy.

Hiss, of course, was convicted. Not for spying; for lying… about knowing Chambers. His penalty? Forty-four months in a federal prison. Either too much, or too little. So many questions hung fire. There’d been a decidedly peculiar means of “finding” evidence. Moreover, Chambers’ personal animosity toward Hiss raised doubts about the motives and honesty of his own testimony. So Hiss was a spy or a liar? Both? The debate continued for decades, producing less rational examination than passionate political coloring, both on the right and the left.

In five chapters examining four decades from this recent past Jacoby shows how readily both liberals and conservatives used the Hiss/Chambers case — for their own ideological purposes. The game ended in the 1990s when newly-released Soviet and U.S. files confirmed Hiss’s guilt.

The public forgot about the case. Jacoby’s excellent revival of the dangerously distorting passions it evoked is an evergreen reminder. There’s a wide arc of opinion-tainted “fact” for which a democracy must, nevertheless, permit freedom of speech and press. And it is all too easy to believe what we want to believe.

Log onto Internet: we drown in sites blinking news/information/commentary. How much of it is even tenuously fact-based? How much of our “information” is accurate?