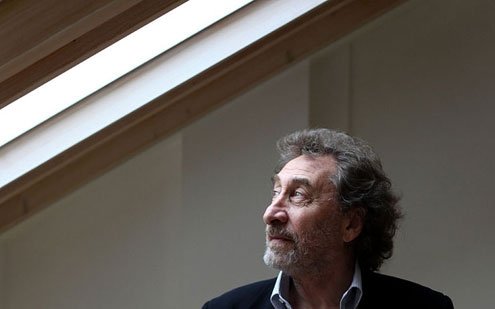 Howard Jacobson's "J" is a scathing, futuristic satire about the dimensions of loathing.
T

he title and cover image of Howard Jacobson’s latest novel is the letter “J” (Jonathan Cape: London, 2014), its jagged, black-smudged edges suggestive of smoldering. Two red slashes cut through it as if to complete the formal devastation. It’s a suitable image for a grim dystopian satire that despite some overkill represents Jacobson’s bleakest and most powerful career take on “the Jewish question.”

“J” is the story of woodcarver Kevern Cohen and orphan teen Ailinn Solomon, who meet and become lovers in the bleak northern coastal village of Port Reuben. Kevern, the middle-aged grandson of a “refugee,” suffers anxiety whenever pronouncing any word beginning with the letter “J,” covering his mouth to “stifle” the sound. It is part of a legacy of apprehension inherited from his father, a man terrified by memories of the “before” — though what happened during the “before” has been excised from history books. A presumably apocalyptic event two generations earlier is obliquely referred to only as “WHAT HAPPENED, IF IT HAPPENED.”

“Just forget” is the ruling motto in Port Reuben and nearby Bethesda, both located in an unnamed country where violent clashes are inexplicably on the rise. In town, peaceful Kevin and Ailinn enjoy an affectionate sex life, unusual amidst punishing and widespread sexual aggression. The two have much in common. Both, like tourists, are considered “aphids” — white lice or parasites. Neither has any detailed knowledge of their lineage. They share a dread of being spied on, justifiable since many do in fact secretly investigate these two, seen as crucially “different.”

They fear invasion. Kevern worries about his home while Ailinn’s terror is more visceral: she anticipates harpoon attack by Ahab, with herself as his white whale. Kevern spends his spare time on a lone bench that “looks onto a sea that went nowhere” and “lapped no other shore.” Yet the waves rage, and the sands spout a huge blowhole.

Yes, Melville’s Ahab and a vast blowhole on a nameless country’s seacoast. Groan. This is one of Jacobson’s heavy-handed comic effects, which make little sense under the circumstances since aside from scattered light irony there’s nothing to laugh about in “J.”

Perhaps Jacobson wrongly assumes that an ironic glaze can distract from Kevern and Ailinn’s more saccharine moments. The tendency is reminiscent of Jacobson’s previous work, also littered with witticisms, gags, and broad comedy, some of it undermining serious themes.

Here, the few broad gags contain menace. When Kevern’s prying neighbor Densdell Kroplik suddenly assumes a comically exaggerated Yiddish accent, it has threatening overtones. In theory, Jews have disappeared from this strange country, surviving only as half of every citizen’s full name.

“IF IT HAPPENED” was followed by Project Ishmael, with authorities drawing up a list of new names — part Jewish and part ancient origin — and requiring citizens to choose one. Was this part of the public campaign that also compels each citizen to constantly exclaim, “I’m sorry,” even without apparent cause?

And what about “IF IT HAPPENED,” which Benign Arts Professor Phineas Zermansky refers to in his diary as the horrific elimination of “alien intelligences,” the spontaneous cleansing of those who thought they were clever and had accumulated hidden wealth? Eventually, their provocation was met with a raging global reaction that wiped away their defilement.

Jacobson sprinkles hate-riddled anti-Semitic clichés to wake up sleeping readers. But who can miss the repeated Old Testament references to Ahab, Bethesda, Ishmael, and Reuben? Still, Jacobsen can’t stop himself. All’s well now, says Professor Zermansky, “unless … there’s anyone or anything … left over, for business dangerously unfinished.”

Thirty pages into the novel and the author already points to his finale. Further clues spatter the pages like fat rain drops. Throughout history, Jews have suffered pogroms. The next is forecast, and then carefully planned out, in the sub-story of Esme Nussbaum, who works for a company called Ofnow, “nonstatutory monitor of the Public Mood.”

When Esme reports that her kinfolk “are not healed,” she’s run down by motorcycle. While in a coma, she develops a plan. She will hunt down secret documents regarding Ailinn’s and Kevin’s lineage. When she does, she discovers that two are at the source of the failed healing, and also its solution. The “IF” in “IF IT HAPPENED” requires completion, “to restore the nation’s equilibrium of hate.”

Here’s where sugarcoated Kevern and Ailinn are transformed into grotesque figures in a furiously cruel parody of a Jesus-like birth. Ailinn will bear their child — and how that story ends is all too familiar (passing through another Bethesda in another time).

What to make of “J”? At times, the Jewish question gets a sledgehammer approach. Even so, Jacobson’s shock episodes contain unsettling twists. This is dystopian fiction that digs into endless layers of historically rooted prejudice. Generation after generation it rises against the “alien” people, a shameful and terrible truth.