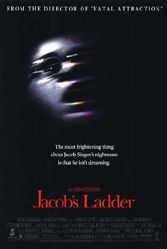 The problem with a film achieving cult status is that it no longer requires conventional explanations. Adrian Lyne’s “Jacob’s Ladder” is a case in point. Jacob Singer (Tim Robbins; outstanding) is a traumatized Vietnam vet who lives in New York but is haunted by war memories that come in hallucinogenic waves. The central question is one of mental geography: are Jacob’s visions real memories or Gothic slivers of paranoid delusion? Was he experimented on by the military? Is he in Hell, headed for Hell, or already dead? Girlfriend Jezebel (Elizabeth Peña) gives conventional reason brief solace by monitoring Jacob.

But as the film first trembles and then lurches forward, the rational grid vanishes. This is an wildly nerve-wracking horror adventure about the destruction or reconstruction of something remembered. Which one it is depends entirely on your weak points. Flawed but unforgettable.