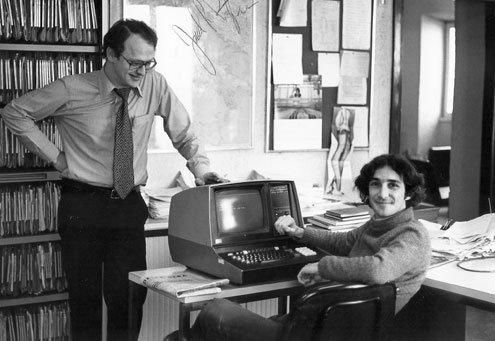 Jack Payon and the author in the Via Della Dataria offices of United Press International, which long ago closed its Rome bureau.
T

he man who gave me my first break in mainstream journalism is dead. I found this out by chance, stumbling on his name — Jack R. Payton — in an obituary. The obituary was neat and tidy and covered all the bases. He graduated from Tulane University and soon joined the news agency United Press International. UPI sent him first to Brussels and then to Israel, in time for the Yom Kippur War. He was barely 30. After Tel Aviv came Rome.

He hired me at UPI when I was 24 though I lacked formal training. “I think you can do good work,” he told me. He also befriended me and taught me countless lessons.

He told me not to waste words and warned of the peril of commas. A comma could wreck an otherwise good sentence. Two were all but sinful. A clause was acceptable so long as it didn’t interfere with the substance of a statement or become a distraction. The grammar of news was terseness. Flourishes could wait.

He told me the opening sentence of a news dispatch — the “lede” in jargon — should rarely number more than 30 words. Too few were bony; more suggested an unfocused mind. Never use semicolons or exclamation points. Never use the verbs “state” or “assert” or “observe” when “said” would do, and it usually did. Direct speech should be direct. Simplicity was a news writer’s most effective tool.

Like most in his profession, he saw the first person as a menace. The appealing but selfish ardor of the “I” added a sentimental tint that put emotional truthfulness ahead of detachment and introduced a powerful slanting process that had no place in news reporting. It was a path to the endless purgatory of bias.

He told me most major dispatches should number 400 words or less with the rest covered in features that should never surpass 800 words. These guidelines existed to rein the very human tendency to excitedly repeat facts or add unnecessarily lengthening rhetoric. Say what’s needed once and move on, he told me.

He told me of the part of his youth he spent in Cajun country. He still remembered a smattering of the medieval French he’d heard from his grandmother and gave me limited sampling. The exchange made me smile since I’d been brought up speaking Parisian French.

He once told me, “There’s a big difference between the Italians who left and the Italians who stayed,” a comment so bewildering and perfectly obtuse I wrote it down in the Rome notebook I kept while working for him. He found it amusing when I was shocked to find a cockroach at the bottom of a pasta bowl while having lunch at a trattoria near the Trevi Fountain. In the Middle East and in Africa, he said, my pickiness would cause me to starve.

He said these things with a kind of half-muttered laugh I found easy to love and confide in. He spoke Italian with a bashful drawl. He did not drink. He did not smoke. He was intensely self-effacing and private. He believed in God. He never swore.

He told me of his love for fighter jets — he’d served briefly in the National Guard — and how during the Yom Kippur war in 1973 he watched aerial dogfights in which Israeli air force planes duped one Syrian MiG after another. The Israeli Phantoms briefly let Syrian fighters tail them only to suddenly throttle down, their enemies whizzing ahead. The Israeli pilots then had the Syrians in their sights. “They kept doing it. I’d just stand there below and shake my head, Chris.”

He found Chris more comfortable than Christopher, and aside from bylines that was my name. He called me at home when Pope Paul VI was dying and sent me on a Sunday to Castel Gandolfo for what would soon become the biggest story on the planet. He could have chosen a veteran but deliberately stuck to the duty roster. “I’m a little nervous,” I told him. “Just get out there fast and do your best,” he replied. I went.

He told me never to walk away from a story. Write it badly if necessary and then trust your desk. He believed in editors and editing. I believed in him.

He was in a movie theater when a heart attack killed him, or so the October obituary says. Use active verbs, he told me. Never begin a sentence with “And.” Good news writing employs only the past tense, he said, a tense he now knows first-hand, never mind the sadness my clauses conceal.