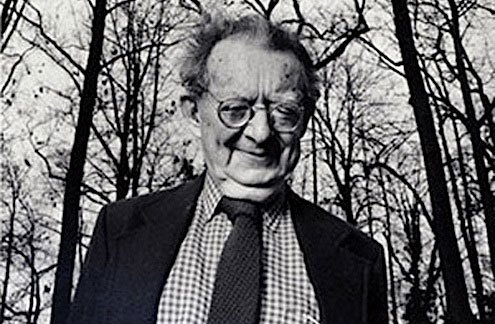 Stone in 1988; his weekly and his later articles for the New York Review of Books made him a legendary figure.
D

ick Dudman of the St. Louis Post-Dispatch was captured by Khmer Rouge guerrillas in 1969 and held hostage in Cambodia for 40 days. Before that, on weekends, he’d pull out weeds in his front yard on the potholed stretch of Ordway Street that clunked toward Wisconsin Avenue in Washington, D.C. He’d wave from time to time, weeds in hand, and I’d wave back. I’d daydream about his neighbor’s daughter, a red-haired girl named Lizzie and play Sisyphus with my heavy Sears bike, which I guided over the pyramids of muscled tree root that broke whole squares of pavement.

Dudman returned safely from captivity, but he gardened less.

Or so it seemed.

The idea of a Department of Historical Fallacy was launched by I.F. Stone — “Izzy” — the incorrigibly liberal pamphleteer my father lunched with every month or so on upper Wisconsin Avenue near the Avalon Theater in a British restaurant that served London Broil (Stone swore by it) and was called “Piccadilly” or “London Grill,” I can’t remember which. Stone’s had a lozenge-shaped face like a child’s fairy tale moon with Coke bottle glasses so thick they made his eager eyes seem like alien probes.

From time to time my father took me to these lunches where the two men would yowl about foreign policy between bits of rye bread and meat. At 16, I was not invited to speak. Stone, my father told me, published “I.F. Stone’s Weekly,” an idiosyncratic mimeograph pamphlet (four pages) that he distributed to Washington movers and shakers and that made its way to New York along what my father called “the Eastern corridor.” Once, flying in the Eastern Airlines Shuttle from La Guardia to National at night, he gestured at the window. “Look down!” and the back of his hand curled like a waking serpent, “See! It’s all one vast city, look — from Washington to New York. All those lights!”

The Department of Historical Fallacy would attempt to avoid policy blunders based on historical precedent. Its officials would register fallacies to ensure they weren’t repeated and pass on accrued insight from president to president, assistant to assistant. The department would avert useless confrontation by tamping down on righteous but inaccurate assertions. The smart Dick Dudman was too mainstream for all this. He never attended the lunches. The wartime captivity had made him less conspiratorial.

The men at Historical Fallacy, said Stone, coughing joyfully in Jewish syllables, would make us look “less idiotic than we are.” Any proposed executive exploit would require review by a “fallacy” member. “Wait, is this is an excuse…? a fallacy monitor would ask. “Do you know the history of Vietnam? Of Iraq? Of invasion? Have you studied the lesser of evils?” And things considerably more clever.

Stone wolfed down his London Broil and my father sipped glasses of water hampered (as always) by the cold overflow of ceramic ice.

I knew little of Stone’s writing, to my detriment. “Read him,” my father instructed when I asked for more information. I learned he was an “independent journalist” who produced and printed what he liked, unfettered and effervescent. He asked questions to answer them. “How do you crush an inspiration?” he wrote of Cuba communism in 1962. His answer: “The only way to combat an inspiration is with another inspiration.” And later, in 1964, as Vietnam grew in scope: “Even a wholly militarized America will not prove strong enough in the long run to impose its will on a rising sea of discontent.”

Stone and my father plumbed this discontent. My father tested theories — that the world was at an unprecedented ethical stalemate because nations possessed weapons they could not test in battle — while Stone raged against U.S. government pretense and omission. He deplored Defense Secretary Robert McNamara’s misstating of the Vietnam War as many today challenge Donald Rumsfeld. “The basic fallacy,” he wrote of Vietnam in March 1964, “is that that South Vietnamese war is an invasion, somehow run by the Chinese, when it is actually a rebellion by the South Vietnamese themselves.”

Stone never reappeared in my life after those lunches. My father passed down the weekly and I honored it by placing the copies near my collection of sports pages. Stone outlived my father by some 20 years and after his death was labeled an iconoclast, which sounded to me like a scolding. Some suggested he was a Le Carré-style spy, a critic of U.S. policies who furnished useful tidbits to the KGB. He’d heard it all before. “You may just think I am a red Jew son-of-a-bitch,” he once said, “but I’m keeping Thomas Jefferson alive.” He numbered powerful anti-Americans among his contacts and nagged the patriotic powerful for details, which he used as a boxer might use jabs.

But he never did get around to the Department of Historical Fallacy.

That’s a pity now, when the tools of veteran intelligence – erudition, intuition, and historical context – have been lobotomized from decision-making on the grounds they’re time-consuming and insufficiently immediate. The pre-eminence of the immediate makes memory and context annoying deadweights.

I recently found an old Stone passage of intuitive bravura. About Nasser, he wrote that the United States and Israel had “sacrificed long-range wisdom to short-sighted advantage.”

“[Nasser] is a military dictator, he wages his own Vietnam in Yemen, he used poison gas there against his own people, he runs a police state. But he is also the first Egyptian leader to give Egypt’s downtrodden fellahin a break. It is fascinating to recall that Egypt has been ruled by foreigners almost since the days when David and Solomon ruled in Israel. Not until Nasser’s time, and the eviction of the French and British at Suez, have the Egyptians at long last become the master of their own ancient house. Nasser’s program has given Egypt its first taste of reform, on the land, in the factory, in health and educational services. His accomplishments certainly surpass those of a comparable military figure, Ayub in Pakistan. The U.S. oil interests, [Lyndon] Johnson’s animosity and Israel’s ill will have been united in recent years to get rid of him. They have all favored feudal monarchs like Saudi Arabia’s whose day is done. It is Nasser who represents the future and who can create the internal stability so necessary to peace. The alternative, if he is overthrown, will be some more fanatical and less constructive force like the Moslem Brotherhood.”

The piece is dated June 12, 1967. I wish its prescience owned influence in Washington. If only for the future.