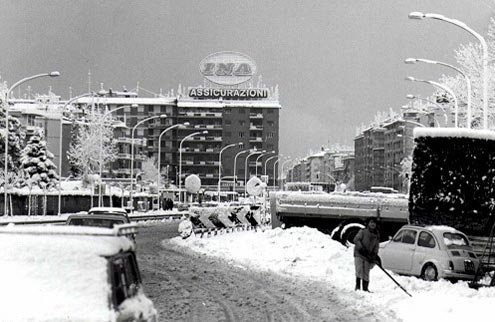 Via Tuscolana near Piazza di Cinecittà in Februrary 1986. In all, 15-to-25 inches fell on the city, slightly more than February 2012.
R

ome last endured a real blizzard 27 years ago in February. I remember because I boarded the final Rome-bound flight cleared to leave London’s Heathrow airport. The departure board listed us as “cancelled” but someone’s second thoughts intervened to extend our night.

There was no cable TV and no Internet; there were no mobile phones. Most of us knew what was happening only from airline intermediaries and those with transistor radios, the most useful talking miracle, and the only portable one that wasn’t hours old.

The London papers had mentioned a chance of bitter cold and frost throughout the south, but snow? Not Rome. I knew Rome. Not Rome.

Ninety minutes into the two-hour evening flight the British Airways captain came on: Snow, he said; diverted, he added; sorry, he concluded. The man beside me, an Italian, was bewildered. “What is happening?” he asked. I had an explanation ready. But an Englishwoman with a rudimentary knowledge of spoken Italian jumped in. “It is… nevicating,” she said, transliterating the Italian nevicando with sincere emphasis. It was an unforgettable line, and it worked. The man nodded appreciatively.

At first, it seemed we’d head to Pisa, or even Milan, where the situation was apparently better than in Rome, a meteorological role reversal. I counted my paltry lira and wondered where I’d stay the night. I had no “nevication” contingency plan.

But then, suddenly, came good news: We’d been allowed to “try” to land in Rome — a decent, honest verb from the captain, probably unthinkable now. “We’re going to try to set down. They’ve apparently cleared a runway. So that’s what we’re going to try to do. Wish us luck.” Such candor would now be perceived as alarmism.

Mr. Nevicating, brooding and confused, required further attention. This time the helpful transliterator improved on her Xanadu-like mishmash, managing to make it terrifying. She announced that we were going to attempt “To enter into the nevication …” — “Entrare dentro nella nevicazione…”

And so we did.

The landing was a hush, a puppy on feathers. I heard nothing. We leapt into the soft runways’ dark white lap. Outside the snow tumbled for attention. People applauded.

No doubt those of you who live in Rome think it’s snowing now, this February, and it is, or was, fatly in fact. But this fatness and that one can’t be compared.

The nevication of February 11-12, 1986 was more eager, persistent, flattening. It began in the afternoon, continued into the night, and tapered off only the next morning. The final result was between 15 and 25 inches of snow, the most intense blizzard of Rome’s 20th century.

Fiumicino, our arrival airport, was already closed. We debarked on foot across the snowy tarmac and into a diminished terminal where no one was interested in us, not even our passport. Those who had luggage (I did not) would remain stuck for hours (maybe days).

Once into the arrivals area — in those days there was no train or bus linking Rome to the airport, only taxis — I looked around for signs of human life. A barman stood alone like a still from a Hopper print. All the limousine booths were empty. Outside, at the head of the cab line, was a tall tuft of snow, the wind blowing from its ridges. One cab stood stuck at an angle, at half a zigzag, stalled and snowbound. I found its disconsolate driver. I asked him about getting into the city. He merely pointed at the car, and then at the cold, flaky night: “Non c’e speranza…” – “There is no hope.”

Back inside, I saw a man at a rental car desk, Europcar. He’d come up to clean his hands with pieces of newspaper. I ran to him like a Christ Child. A car? I said. You’re crazy. He replied. But did he have one? Yes, he did, but it had no chains. I did what I’d never done before or since. I pulled out all my money, gnarled bills in a wad. He began the wet paperwork.

I eventually received a blue Ford Fiesta with Torino plates. I used my overcoat, already soaked, to clear the dash of snow and ice. My feet were damp and chilled from the walk to the lot (no buses were running).

Beginning at 10:30 p.m. the night of Feb. 11, 1986 I drove my honest blue Ford toward Rome. The blizzard let me see no more than 20 feet ahead. I averaged 20 miles an hour. I crawled along taking pain to avoid antics. The snow was still new and soft, still vaguely kind to traction. By the time I reached the gates of Rome I’d acquired confidence. I didn’t see a soul.

Only then — it was 2 a.m. — did I turn into a child. I drove up deserted one-way streets, taking shortcuts, and soon made my way along the muted Tiber to the vicinity of St. Peter’s. Why not? Why not stop at the Basilica? It was on the way home. So I pushed the stalwart Ford to outside the snow-capped Bernini Colonnade. There I parked and got out.

It was 3:15 a.m. and I was alone in St. Peter’s Square. For the first and only time in my life I owned the city, a solitary small pope on a very snowy night.

I saluted the epic nevication, patted the car on its tummy (the roof above the driver’s seat), and went quietly to bed.