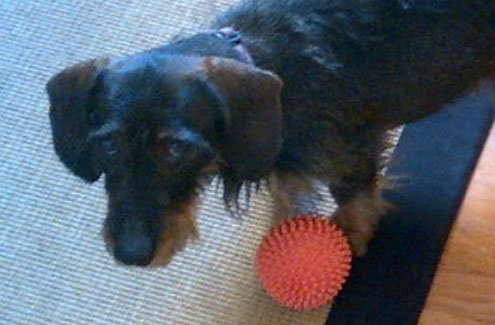 ear Mr. Editor: I bet you don’t get much mail from dogs. But The Lady, that’s Madeleine Johnson, wasn’t getting anywhere on her column, which she says is my fault because I want attention and ask her to throw my ball when she’s trying to write. (Jeez, some excuse!) The topic was dogs in Milan, so I figured I’d handle it. She was slacking, and I’m the one who knows the facts. So here it is “Milan Notebook” written by me, Dog.

The lousy rain is finally gone. For months, I’d drag myself out of my basket for “walkies” and then see The Lady pull out my raincoat. Just seeing that raincoat made my tail go between my legs (the tip touches my stomach). I’d crawl right back in that basket. Milan’s drainage is bad; do you like cold, muddy puddles up to your armpits?

But with spring here, no need for raincoats. I can head out with my tail held high. Spring’s nice because I don’t have to choose between the dry strip along the building and getting wet by going to the park. Also, in spring there are tables outside the bar on the corner; yay, crumbs! On the other hand, the Wobblers — bike amateurs too wimpy to ride in the cold — are a street hazard again.

I’m seeing some familiar spring-has-sprung faces. Like the two Chihuahuas who go out in a baby carriage. One is a dark blue, Martinelli number that looks like Queen Elizabeth’s pram. These days most everyone has a Scandinavian thing that look like space docking stations. Anyway, the Martinelli has been souped up for its new destinazione d’uso, with a net instead of the hood and pillows for the “dogs” to sit on (is something that wears a bow really a dog?).

I saw Pigna from next door, but she didn’t stop or anything. We used to play as puppies. Now I guess we’ve both kind of moved on, but The Lady says Pigna could be nicer. While she’s only a mixed breed, I have several names and good lineage.

I saw Molly the sheltie going to the park with The Distinguished Gentleman. The Lady always reminds me that Molly doesn’t need a leash. But Molly’s a bossy sheep dog, not a busy hound like me. In the park, The D.G. takes in the sun while Molly and I rummage in the panino bags and beer bottles we find under benches. The D.G. never talks to The Lady. Both The D.G. and Molly were moving more slowly than last year.

In the dog run, I don’t usually join canine games. I prefer sniffing holes and trees by myself. The Lady says being anti-social deprives her of the social dividend that dog-ownership is supposed to pay single pet owners. It’s my bad choice of women, she says. So what if a dachshund likes golden retrievers? She says the — well — doggedness of my attention kind of turns everyone off. The Lady usually gets very interested in her phone when I find a girl I like.

I saw Thor-a German shepherd. He was running with his Walker, who was on a bike. The Walker is bald, wears cargo pants, has tattoos and is famous with Milanese locals who think he has a way with dogs. Really? Walker to Thor: “Thor, now if you don’t put that stick down, then we’ll have to go home.” Thor usually ignores him. Maybe, like me, he gets lost with “if/then” propositions and sentences with clauses.

The Lady’s had ball trouble in the park lately. She thinks I like playing ball in the park. I pretend for a while to please her, but then I get distracted. It’s not fun, like interrupting The Lady at work. The other day in the park, Corinna — the shih tzu — took my ball. The Lady says Corrina’s owner looks like “40 years ago someone told him he looked like Richard Burton.” He does overdo the Welsh look a bit; tweed jacket, tweed tie and tweed hat and shiny Italian shoes and pocket hankie. He thought The Lady was huffy when he couldn’t get Corinna to drop my ball. The Lady certainly wasn’t going to prise the saliva-covered thing from some yucky dog mouth. (Mine isn’t yucky.) So we went home.

A couple days later, when The Lady was riding her bicycle, she found a tennis ball in the gutter. A guy on a motorino at a stoplight laughed out loud when she turned back to pick it up. She brought that to the park, too, and a greyhound took it while I was doing some territory-marking. That dog’s owner yelled at The Lady, “Don’t you know not to bring balls to the park? It’s not politically correct!” Politically correct? I don’t know, but it does seem like The Lady doesn’t catch on.

That’s all for now. The Lady says the hardest part of writing a column is the end. I don’t see why. When you’ve said what you have to say, you stop.

Anyway Mr. Editor will fix it up. That’s what editors are for.