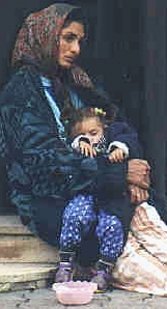 Good deeds can backfire.
I

’m one of those people who will try almost anything once. This week I did something that I’d never done before (get your mind out of the gutter, people) — I gave to the Rom or gypsy community.

Let me preface this by also noting that as a hardened former New Yorker I don’t give to street people. Period. It’s not that I am unaffected; it’s just overwhelming to choose who is worthy of help. I instead give to a charitable organization of my choice. End of story.

But I’ve been out of New York for a few years now. I’m also a mother. Maybe the combination has brought out my “softer side of Sears.” So, last week when I was approached by a Rom woman on the street — with not one, not two, but three children — I cringed. I was uncomfortable, but did what I usually do: I avoided eye contact and kept up a purposeful clip.

Then I heard the girl (who looked about 10) ask me, “Do you have any clothes for the baby?” She spoke sweetly and chose her words politely as she gestured to the filthy infant.

My armor was punctured. My veneer began to melt. I looked at her. And more importantly, I saw her. Behind the unkemptness, she was a pretty girl with delicate features. She had a slim but able body and a look behind her eyes that said, “I didn’t ask to be born in to this.”

Earlier in the week I had packed an enormous shopping bag full of things we no longer used. I had planned to take it to a local charity. But now this girl had gotten to me.

“I am going to work. But when I come back, I have a bag of clothes for the baby,” I said.

She told me I could find her in front of the neighborhood church; that she was always there.

I walked away in my Costume National boots while pushing my Mercedes Benz-like stroller. I felt dirtier than they looked. (Oh, and my young son was clad in Ralph Lauren and Levis.)

As we strolled down the street, questions spiraled through my mind: Why is that baby with that mother? Why is my son with me? How could one child be so lucky and another so unfortunate?

The next day, I headed to the church and saw the woman with the baby. She was with another woman — the two young children were not in sight. They immediately asked me for the bag, and I handed it to the second woman, as her load was lighter.

They began struggling over the bag as about a dozen other Rom women came running — even those who were normally hunched over and walking with canes — to stake claim on some of the goods. I had started a war.

I stuck up for the first woman. Actually, I stuck up for her baby, who seemed to be suffering from some kind of upper respiratory infection. “No!” I said to the second woman, who still had the bag. “This stuff is for her baby.” By then, the first women and her children were grabbing at me and I knew I had to make my exit. I was with my son. I had tried to do a mitzvah and it had all gone horribly wrong.

I made a beeline. As I turned, the 10 year-old girl stood before me. She asked me for diapers. I gave her one. She asked for more; I said I didn’t have any. Suddenly she was neither sweet nor polite. She turned on me, hissing. She said something in a language I didn’t understand, but at the same time clearly understood. She and another girl continued following me down the street muttering what sounded like curses.

Could they feed their children? Could they nurture them? Or more importantly; would they?

Clankety, clank, clank: That’s the sound of me dragging out my soapbox

As a person, I have always been conflicted by this community. As a mother; I am disturbed. That is not to say, “I’m a great mother.” Because if you have read any of my previous columns I think we can all agree that I am mediocre on a good day. But I do know motherhood entails a lot, and good intentions are the bare minimum.

I know good mothers who doubt themselves everyday; who question the job they do. Is my child eating enough vegetables? Should I have not sent her to day care so soon? Does he watch too much Playhouse Disney?

I frequently ask myself these same questions. And today I asked myself: Should I have helped people who won’t even help themselves?

Clankety, clank, clank: That’s the sound of me putting my soapbox away.