It’s how you dance 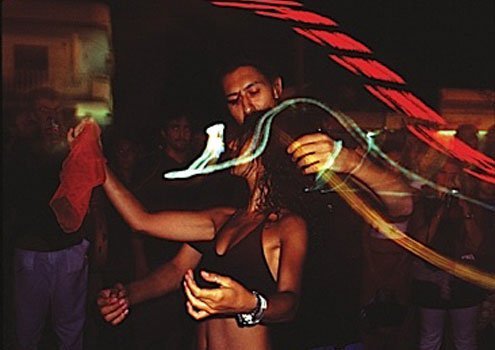 Dancing the night away...
I

n Puglia, you know an offer you can’t refuse. So when I was invited to see the tarantolati, I changed my travel plans to make time for what promised to be a once-in-a-lifetime experience. Who are the tarantolati? To borrow the words of someone who had seen them: “They are people who have been bitten by the tarantula and dance in a trance-like state until the venom has been cleansed from their bodies.” He said I would see people defying gravity to walk up walls, losing control of their bodies and pulling their hair out in a frenzied state until total baldness.

Of Puglia’s magic and mystic undercurrents, none is more fascinating than tarantism. A cult that shares common elements with other primitive religions in Morocco, Brazil and Cuba, it was once practiced by peasants across Molise, Puglia, Calabria, Campania and Sicily. Today only pockets of it exist, although the rhythmic dance music associated with the tarantism is known the world over. It is the tarantella.

Books and university studies have been published about the phenomenon and the roots of the cult most certainly span back to the beginning of civilization although it reached a peak in popularity during the 17th century. The “sickness” most commonly occurs in women who work the fields where the lycosa tarentula makes its home. The hairy-legged spider takes its name from the Puglian city of Taranto and according to medical experts is harmless. But the bite of a second spider named latrodectus tredecim guttatus can inflict days of fever, vomiting and hallucination.

According to the lore of tarantism, once bitten (the bite is called the pizzica, or “pinch”) the victim enters a possessed state and must engage in a therapeutic dance until he or she collapses in exhaustion. The dances can last a night or several days. The victims (the pizzicati) are given a colored ribbon or cloth that corresponds to their “inner tarantula” with which they dance. Four musical instruments are essential — a violin, flute, guitar and tambourine — and musicians use a thumping beat to whip the dazed tarantolati into a frenzy of fabricated hysteria that borders on rapture. Bodies writhe, sway, bob, wiggle, undulate, palpitate, tremble and quiver before falling to the ground.

There are dozens of tarantella dances (including pizzica, ballë ‘n copp’o, tammurrë, zumpareddu, pastorale, tarascone, viddhaneddha, ballarella, and zumparella) and the most beautiful ones come from Puglia’s Salento Peninsula. Some versions of the tarantella are intended as a mating ritual between a man and the woman he is courting. Their two bodies must never touch no matter how loud and fast the music is played. Acrobatic gestures and fake embraces are choreographed to bring the two bodies irresistibly shy of skin contact.

Although tarantism has all but vanished, a new movement called neotarantism is ascending. Its supporters are Internet-savvy youth, many of whom embrace the anti-globalization cause. Festivals in the Salento and the Gargano peninsulas are staged throughout the year, drawing an international crowd. Singer Eugenio Bennato produced a fabulous CD entitled Taranta Power, which ranks among Italy’s best modern folk music today (www.tarantapower.it). Director Edoardo Winspeare released a cult movie on the subject called Sangue Vivo (with another great soundtrack).

As for my own experience seeing the tarantolati: It was a bit like attending Puglia’s Woodstock, and no, I never did see anyone walk on walls or rip their hair out. But it was a great dance party and food fest that lasted until the wee hours of the morning.