It’s all about Alfie 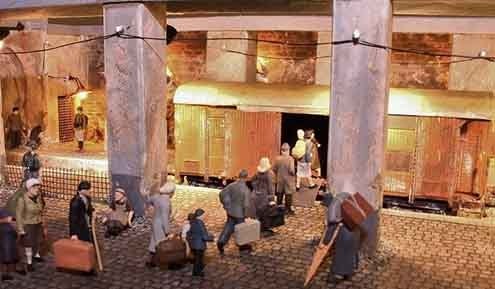 An artists rendering of Binario 21, Track 21, as it appeared when it was used for deportations.
E

very day at Milan’s Central Station, thousands of travelers climb stairs, check signboards, and search for track numbers. They’ll have a hard time finding Track 21 and they’re lucky it’s been inactive for years. Track 21 is hidden away on a lower level of the station. Its location made it easier to load the mail cars the unseen track was intended for. During World War II, Track 21 was where authorities loaded Milan Jews and political prisoners bound for Auschwitz and Mauthausen.

Only 21 of the 300 Italians deported to Auschwitz from Track 21 ever returned. One was Liliana Segre, who was 13 when she left and returned to Milan an orphan. Thanks to Segre and Milan’s Jewish community, Track 21 — the last remaining deportation site — was reopened in 2013 as a Holocaust Memorial.

In 2015, when the flow of refugees arriving in Milan from Africa and the Middle East reached crisis proportions, the Jewish community and the Catholic Community of Sant’Egidio organization offered part of the Track 21 memorial to Milan for a refugee center. Since then, churches, synagogues, mosques and charitable organizations have taken turns manning the center. Last Saturday night, I joined a group from All Saints Anglican church to serve hot meals and provide soap for showers and hand laundry for the 40 people who may stay in the center for up to three days.

I live close enough to the station to walk, but since the work lasted until almost midnight, I felt safer bringing Alfie, my two-year old, wire-haired dachshund. I wasn’t sure a dog would be welcome, but All Saints’ vicar Vicki Sims — and Alfie fan — thought the center could use some dog therapy. If you want unconditional love at the drop of a hat (or pat), Alfie’s your man.

That night, the center’s visitors were all young men from North Africa. When Alfie and I arrived they were preparing for the night; fixing folding cots, taking showers and looking at their phones, alone and in groups.

Every now and then a train would pass overhead, shaking the huge concrete beams. What would it have sounded like in January 1943 when Lilian Segre was deported? Shouting? Crying? Slamming steel doors? Barking German shepherds?

Now it was warm and quiet and food came in the form of the reassuring aroma of pasta and tomato sauce. The lights were low and the atmosphere calm.

Despite Alfie’s enthusiasm helping with the food, we were assigned to pass out Dixie cups of shampoo and laundry soap. So Alfie sat by the soap table, expectantly wagging his tail and offering his belly for a rub. Although many in North Africa consider dogs unclean, Alfie’s good nature is hard to resist. Soon men approached him timidly, jumping back at Alfie’s leaps of excitement. Slowly, a circle gathered around, with the shyer ones peeking over their braver friends’ shoulders. Alfie made it easier for them to try their few words of English; “What name?” “How old?” Two of the less timid said they had arrived together from Eritrea three weeks ago. They were builders. There were dogs in Eritrea they said, big dogs, dogs that drank milk. Did Alfie drink milk?

Only one man really interacted with Alfie. He kneeled down and spent a long time petting him. Alfie wouldn’t let him go. The mad said he was a farmer. He had left his dog behind with his family. Coming to Italy is expensive.

It was cold and damp when Alfie and I walked home. In the dark doorways around the station, human-shaped bundles of rags stretched out on cardboard. African men huddled together listening to the radio and sharing a beer.

Warm beds awaited Alfie and me. The following day I would celebrate Thanksgiving with my friends.

I wondered what awaited those men, with their few skills, no language, and unfamiliarity with winter, among people who were at best indifferent to them? What could traffickers or friends have told them about a continent that was jealous of its jobs and lifestyle that might make their journeys worth it?

A few days later, a story by Jonathan Margolis in the Financial Times made me feel better about the prospects of the men sleeping at the Holocaust Memorial. It was about Michael Sebhatu, an Eritrean refugee and the son of a poor farmer, who used a fake passport to reach Europe in 1990. Though he spoke no English, he got a degree while supporting himself driving a cab, working in convenience stores and in construction. Now Sebhatu has invented Quadsaw, a tool to make square holes in walls for electrical outlets. Quadsaw should make electricians around the world more productive and happy. Sebhatu’s years of work and sacrifice — including no time to start a family — should pay off well indeed.

Soon after reading this heartening story, Alife and I walked through a Milan area popular with African immigrants. Groups of young men like those at Track 21 crowded the sidewalks by the Eritrean bars and call centers.

A well-dressed Italian man pushed through in a huff. “They all have cell phones,” he grumbled. Apparently refugees don’t deserve phone numbers to find jobs or housing or call home — or, if you’re like Sebhatu, to call your patent lawyer.