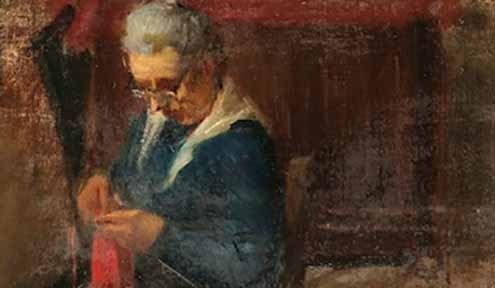 Having Isa next door only enriched our lives…
M

any characterize Italy as a matrifocal society in which la mama is the centerpiece of family life. In fact, the Italian term for children dependent on their mother is mammone, which translates as mommy’s boy. But the Italian word doesn’t have the negative connotations associated with it in English.

Early in our relationship, I told Alberto I would not discuss moving to Italy until he had “the talk” with his mother explaining the nature of our bond. I had already been in a relationship in which a boyfriend hadn’t told his parents he was gay. I learned the hard way that if he couldn’t be honest and forthright with his parents, there was little likelihood he ever could be with me.

When Alberto told his mother we were a couple and I was coming to Italy to live with him, she simply said, “Well, it’s about time.”

Isa, the name everyone who didn’t call her mamma or nonna used, lived alone in a very large apartment about 20-minutes walk away from us. Though Alberto visited her daily and his brothers and sisters were also diligent, she was no longer a regular player in anyone’s daily life — a fate reserved for many elderly people.

A few years after I moved to Italy, when the apartment across the hall from us became available, we asked Isa if she might like moving in next door. The idea was to allow he to remain as independent as possible for as long as possible, yet also be an active part of our day-to-day lives. Without any hesitation she said yes. I admit, the idea of living next door to my mother-in-law was a little strange at first but I was also confident that she wasn’t the least bit invasive or medaling.

As the years past, having Isa next door only enriched our lives — pop-ins, drop-ins and maybe dinner in the kitchen. If I was having an art show, Isa was always there, when the plumber came she opened the door and when we couldn’t remember if we were supposed to turn the clocks back or ahead an hour Isa always knew. Every Wednesday afternoon, for almost six months Isa patiently listened to me trying to read my first book in Italian, “Pinocchio.” On special occasions, Isa, Alberto and I would venture out for an elegant cocktail at a traditional bar called the Gin Rosa, where she used to go with her husband in the 1950s and 60s. And when Alberto and I announced we were going to Canada to get married in 2005, Isa took us to the jewelry store and bought our wedding rings. She was part of our lives and we were part of hers.

At one point, her grandson, who had escaped a bad relationship with little more than the clothes on his back (and a load of debts) came to live with her. For the following three years, the four of us shared Sunday breakfasts in our pajamas. In a building such as ours, with so many lonely aging widows, it soon became quite obvious that Isa was envied.

When we decided to renovate our country home at Lago Maggiore, which Isa’s father had bought just before World War II, Alberto’s sister took the first floor while we made our bedroom in the third floor attic and shared the second floor with Isa. Alberto and I came and went as we pleased, but on many a warm summer’s night the three of us sat on the terrace, and shared a shot of vodka, some old stories about the way things used to be way back when, and of course, laughter and sometimes even a song from the war.

On the last day of August, for the first time since she was married in 1942, Isa, took off her wedding ring, placed it on her bedside table before she went to sleep. She had been going downhill for quite some time, a process that had accelerated in recent weeks.

The next day Isa breathed with difficulty and was barely conscious. She lay in bed with her cat, which as always lay on the pillow against her head. Her son and me, her daughter and her daughter’s husband and her caregiver were crouched on either sides of the bed resting our heads against her and caressing her. At the age of 97, Isa died in her own bed in her father’s house with her family by her side.

Whether it’s to the younger generation just starting life or the older generation saying good-bye, family is preciously important. Sexual choices stand still. Life, and death, becomes all about human beings you love.