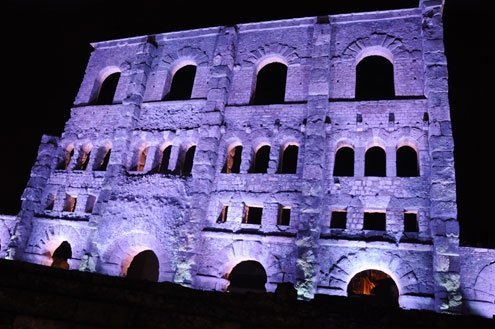 y introduction to what Rome is like in August came last year. In three words: hot, closed, and crowded (with tourists). Everything I loved about the city — the family-run trattorie, the pleasant weather, the familiar faces on my street — had disappeared. In their place was a ghost city, populated by enormous, flag-led groups of foreigners.

Next year, I vowed, I would leave in August. No more heat. No more tourists. No more crowds. I’d go to the sea, maybe. Or, better yet, the mountains.

Twelve months later, I found myself in the Valle d’Aosta.

The choice, it seemed, couldn’t have been more perfect. A nominally Italian region wedged between France, Switzerland, and Piedmont, the Valle d’Aosta boasted everything that Rome did not. Air so fresh, breathing it felt like taking a gulp of cool water on a hot day. Mountains so high, they remained frosted with snow and ice. Lush greenery dotted with sleepy, picturesque villages, all with the kind of wood-beamed, flower-potted houses that made you think you had stepped straight into a storybook illustration of the Alps.

While there were other visitors there, they seemed few and far between. At least compared to Rome. I didn’t see a single tour bus; I didn’t hear a word of English. At night at home, I’m woken by the garbage truck that comes at midnight, the noisy guests of the B&B next door, sometimes even the thump of base at a club down the street. In the Alps, only two things startled my sleep: the cat that snuck in through the window, and the dog that bayed along with the church bells that clanged every morning at 6 a.m.

Meanwhile, I’m used to paying €35 per person for a good, three-course meal in Rome. Eating at a local agriturismo, the food just kept coming. Local meats and cheeses, carpaccio, Bechamel-filled crepes… and, as the server (and farmer) told us, “These are only the starters!” My boyfriend Steve and I ate until we hurt, drank wine and grappa and coffee. The cost? Forty euros. Total.

One day, we took a funicular up Chamois. It cost two euros to sail from 1,100 up to 1,800 meters; there was one other visiting couple on the gondola with us, as well as a local woman carrying shopping bags. When we disembarked, we were greeted by a farmer’s market selling local cheeses, honey, and bread. Three lift rides and another 600 meters up the mountain later, the scenery couldn’t have been any quieter.

By the top, everything disappeared into fog, making it all the eerier when we heard bells tinkling. Cow bells. But, through the twist of mist beyond us, we couldn’t see a single animal — only two marmots that scurried beneath the lift.

At the top, looking over the cloud-strewn tumble of land that plummeted down before rising up into, of all things, the Matterhorn, I rubbed my chilled hands and smiled. Complete calm. Rome, and heat, and crowds, couldn’t have been farther away.

That night, tired and still full from an on-the-mountain picnic of bread and fontina and stravecchio, we stopped at the grocery store for a few snacks for dinner. As we purchased our goods (yes, more bread and cheese), the woman behind the counter asked if we were going to Aosta for the festival tonight. What festival? we asked. Ah, the summer festival! she said. The whole city would be celebrating.

Of course, we had to go.

Until then, the town hadn’t necessarily been on our list — not with all the villages to see and mountains to climb (or funicular up). But as we walked in, we knew we’d encountered another little bit of serendipity. Little girls in traditional dress danced in a ring with their fathers while locals proudly looked on. Stalls handed away locally-made artisanal beer, gratis.

At another tent, a gray-haired man pushed us to take a free plate of bruschetta with local cheeses and meats and lard. When we asked where the food came from, he said from his farm. But the name of the farm was nowhere to be found. We asked for a business card; he didn’t have any at the tent and had to wander away to go find one. Giving something away for free without even getting publicity in return? Steve and I stared at each other in disbelief. We were very far from Rome indeed!

By the time a tub of pure panna came out practically the size of a wine barrel, and the farmers dipped us a cup to try, I’d fallen in love with the town, the people, and the region. And that was before I even tried the cream, hand-whipped from the milk of local cows. After? Forget it.

Still, there was one thing that we’d thought the region didn’t have on Rome: the history and the ruins. It’s the little bits of antiquity, tucked into street corners and under building foundations, that I love about the city. Out here, there were dramatic mountains and fantastic food and lovely people. But those visible layers of history? Surely not.

That’s when we passed under the Porta Praetoria, a gate built in the town in Augustus’ reign. And came right onto the huge section of a first-century Roman theater, still more than 20 meters high. Around every corner in Aosta, too, we started to notice… antiquity.

Steve hit himself on the head in mock-disbelief. “Of course! Aosta was founded by Augustus,” he said. “That’s where it gets the name from.”