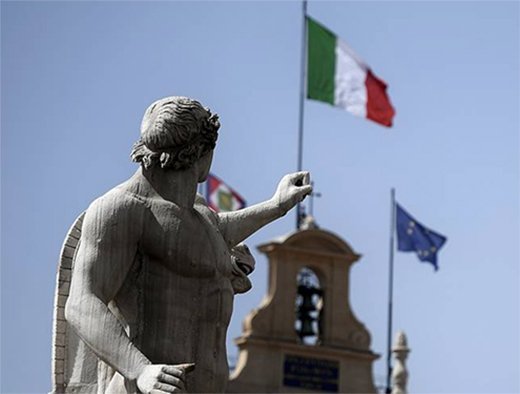 Italy wants to spend more for ostensibly noble reasons, but does it really have the cash. The numbers say "no."
S

ome 20 years ago, a wealthy American ambassador to Italy — he’d made his billions in shopping malls — was casually asked if he’d encourage U.S. investment in Italy. Diplomacy suggested a blandly evasive answer in the form of a conditional “yes.”

No, he replied. Given the red tape, the debt, the lack of follow through, he couldn’t imagine making such a suggestion. If Italy wanted other people’s money it would have to reassure them first.

His chastening remark comes to mind after the European Commission botched Italy’s 2019 budget. That budget called for hefty doses of new state spending, much of it on social welfare, while ignoring the EU cap on not further aggravating a national debt that now stands at an implausible 131 percent of GDP, a country’s total industrial outlay (the nominal EU limit is 60). Only bailed-out Greece, at 179, has a more rancid number.

Without going into the jargon game, let’s just say Italy’s debt is a hefty number of mortgages bigger than the one it already has and cannot afford. At the same time, while metaphorically jobless, it wants to refinance everything at a favorable rate. Whether it will ever repay what it borrows, even partially, is unknown. This is not reassuring math for anyone who dishes out buckets in the capitalist sandbox.

Italy’s debt is a hefty number of mortgages bigger than the one it already has and cannot afford. While metaphorically jobless, it wants to refinance everything at a favorable rate.

Over decades it has borrowed from banks, the EU and third party sources to fund a creaky state that spends considerably more than it takes in. Few invest in Italian bonds because their underpinning is weak. Italian banks are stretched since their principle debtor, the state, is cash poor. Businesses are heavily taxed to make up for some of the shortfall, but that money isn’t enough and exasperates anyone who wants to start anything, leading to flights of intelligence and money.

The state, now led by pseudo-populists, finds itself in a bind after making impossible promises on retirement age and pensions (more money), cash for the poor (more money still), and threats to evict illegal immigrants, a costly project in its own right, and a dubious one at many levels, including Italy’s need for hardcore blue-collar workers.

In a nutshell, mostly middle class Italy has been living off other people’s money for decades, and now not even populist promises can untie the Gordian Knot that is debt.

This is largely a state issue because Italians themselves were smart enough not to plunge into the hole of credit card debt of the kind that afflicts North America. Banks were tight with cards. People were suspicious above giving up personal information, lest the taxman come calling. So personal debt isn’t the biggest problem.

The state is the spender, for national medical care and pensions. Private companies bear a heavy part of the load, hiring people (if ever they do) who cost five times their salaries when all obligations are factored in. As a result, full-time hiring is all but dead and only very large companies make enough to overcome state impositions.

So it is that Italy is stuck in perpetual slow motion, a nation of mostly part-time, or precarious, laborers, its youth bereft of jobs that a more brutal hire-and-fire marketplace would likely put on offer.

It’s politically glib to advertise more jobs and less bureaucracy, far harder to overhaul a jobs-for-life culture and generate positions few companies can afford. Making a half-a-century of Napoleonic-style red tape vanish is especially difficult when the red tape itself is a moneymaker through state notarization seals and fees handled almost exclusively by a legion of accountants that have no wish to rein in their lucrative workload.

The lethal collapse of a Genoa flyway in August demonstrated one aspect of Italy’s infrastructural decay.

A decade ago, Italy’s online-driven Five Star Movement, now in power, vowed to dismantle the system and start from scratch, leaving the EU (read “tyrannical” Germany) and the euro if necessary. Now, as part of the system, it can do no such thing. Too many European bones are connected to too many other ones, at least financially and commercially. The Brexit exit, about to enter its third year, makes the complication of the connections all too clear. When you’re married, to a person or a Union, there’s no such thing as walking out without consequences.

Italy will no doubt revise its budget just enough to meet with EU approval. But this won’t change the debt subtext. Many massively indebted nations, the U.S. included, possess the methods, means and natural resources to reverse course, or go it alone. Italy has none of these things. Its energy comes from abroad. Its defense is in NATO’s hands (and NATO has a big skeptic in its midst). Its fossil fuels come from the Libya and the Middle East. It imports a large quantity of food despite its natural bounty. Northern industrial conglomerates, in drugs and all manner of spare parts, when looking to expand, usually eliminate Italy as a first step. Closing out the shortlist is the predicament of the Italian south, basically Rome-to-Sicily, long promised an economic windfall — since World War II, in fact — but still awaiting one, now as always relying on family ingenuity as a finger in the dike.

The wealthy Republican builder of shopping malls liked Italy, loved it in fact. But he wouldn’t take a risk on a shopping mall chain, not in a place where it might take decades to build one and taxation would deny him the profits he expected.

Listening to the EU-Italy quarrel is great entertainment, soap opera-style. But the script of the show isn’t so funny. It’s about a country still trying to spend more than it has and pretending it’s someone else’s problem. It’s not.