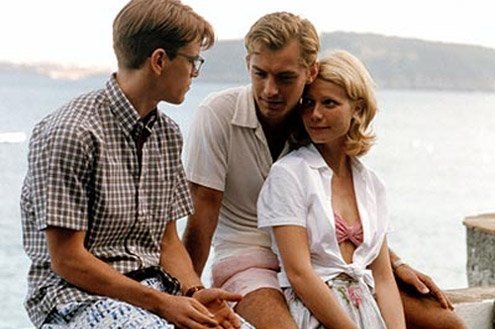 So what was the problem? In a word: Italy.

Midtown bathroom attendant Tom Ripley (Damon) borrows a Princeton jacket to play piano at a New York garden party. A chameleon in need of cash, Ripley passes himself off as an alumnus to waffle through the afternoon (Damon handles this stretch with nervous verve). When the chummy father of recent graduate Dickie Greenleaf (Law) offers him a grand and a free trip to Europe to woo back his self-indulgent son from an extended holiday in il bel paese, Tom agrees.

Many glossy sedans and honking liner later, this leads us to Minghella’s pulpy version of the Old Country. While watching Elizabethan period pieces gives a viewer no choice but to suspend disbelief, seeing make-believe version of 1950s Italy poses a different set of challenges. And Minghella trips time and again.

Down O sole mio Positano way, Ripley meets up with languid Dickie and girlfriend Marge (Paltrow). Dickie can’t remember Ripley from Princeton, but Ivy League ennui gets the better of any suspicion. The movie takes a noir turn when Dickie tires of awkward Tom and ostracizes him from his jaded inner circle — which also includes Freddie Miles (Philip Seymour Hoffman), who lives a debauched life in Rome.

All hinges on the rich man-poor man alchemy that occasionally put bored pretty boys and bad luck wannabes in the same 20th-century room. But Tom’s makeover from wastrel to identity-stealer hinges on Italy, one that’s chock with Neapolitan caricatures that kowtow to Dickie’s whims. These include girls who slur their Italo-English for cinematic effect and boatmen who gargle the word signore. Italy is a prop to Tom’s growing sexual confusion (which even Damon seems unconvinced of). Both and Rome and Positano are brittle and unconvincing at best, eroding Ripley’s foreignness and transforming intrigue into a cartoon.

Only the seemingly infallible Hoffman, a cad whose Rome habits are believably extravagant, gives the script and the settings a bit of CPR. So does Cate Blanchett as a textile heiress named Meredith Logue who pursues Tom-turned-Dickie.

In the end, the Venice climax has the outrageous portentousness of Hannibal Lecter movie. Interestingly, Italian director Liliana Cavani made her own Ripley movie, “Ripley’s Game,” a few years later, casting John Malkovich in the Ripley role. She set it innocuously in the austere Veneto, and wrapped the movie around Ripley to the exclusion of travelogue trimmings. Wise choice.

Tom Tykwer’s soft-spoken 2002 “Heaven” is another Italian-centered caper that hinges on love’s ties to loyalty. Polish genius Krzysztof Kieslowski (“Three Colors,” “The Decalogue”) intended this movie as the first in a trilogy but died before starting. German Tykwer (who made the German hit “Run, Lola, Run”) is a dedicated disciple who honors the material.

The ubiquitous Blanchett is Philippa Placcard, a British schoolteacher in Turin whose husband dies of a drug overdose. She thinks she knows the man behind the drug racket, but police refuse to take her seriously. So she plants a bomb in his high-rise office. The botched explosion kills four innocents and Placcard is arrested as a terrorist.

Enter Filippo (Giovanni Ribisi), a young and mild carabiniere who haltingly translates for Philippa during her interrogation. Filippo, a figlio di papa (also a carabiniere), falls for Philippa because she’s effectively given up. Improbably, he springs her, and the two begin a road-movie odyssey that moves from Turin to Tuscany.

As the two get to know one another, the script draws on a Kieslowski-like interest in character. Rogue Philippa, her head shaved, wants to capitulate to the odds, but Filippo, whose stubborn, emerging naiveté is a kind of gift, refuses to let her give in. He assuages her guilt without ever turning sentimental.

Blanchett’s Philippa is breathtaking. She mixes sullen lucidity with a lost-and-found recognition that to survive might actually have meaning. Exasperating Italian accent aside, Ribisi perfects a necessary innocence.

The climax, which dovetails with Tykwer’s mystifying introduction, will coax guffaws from realists. Still, it’s a surreal take on fictional escape and dazzling to watch.