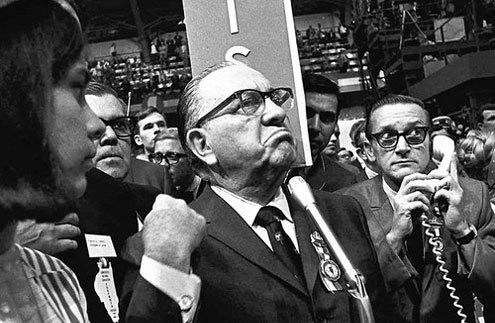 espite intensifying resentment against him, few are the ways that Italian Prime Minister Silvio Berlusconi can lose his grip on power in the foreseeable future. The first is his willing resignation, a highly unlikely event; the second is a parliamentary no-confidence vote on his leadership, which by definition would require a revolt within his own ranks; the third a public defection by his vital Northern League allies, a move that would leave Umberto Bossi’s quirky and ambiguous party on its own and adrift.

Practically speaking, Berlusconi’s future rests not on any great summing up of reprehensible acts — he is an entitled tycoon who two decades ago flamboyantly meandered into populist politics — but whether there exists a workable will to oust him before his term runs out in 2013.

Such political will is not shaped by censure from the likes of fashion maven Anna Wintour, who lately labeled him a dictator; by gadfly Italian pundit Beppe Severnigni, who spoke of growing “irritation and shame” among once pro-Berlusconi conservatives in a Financial Times commentary; by industrial association chief Emma Marcegaglia, who acknowledges Italy’s many downsides but insists “we can do better than this,” tellingly using the impersonal pronoun instead of Berlusconi’s name.

While such righteous indignation is sincere, it represents little more than a cosmetic objection in a culture that despite its many gifts tends to prefer neat complaint over messy follow through.

So far, neither Berlusconi’s alleged legal and sexual transgressions (too many to list) nor his inability to apply persuasive bandages to the country’s deepening economic wounds (Italy is one piece of a far larger euro crunch) have significantly undercut his party power.

To push him aside would instead require full-scale regicide, since Berlusconi’s People of Freedom party is a direct descendent of Forza Italia, which the Milan entrepreneur single-handedly and resoundingly put on the map in 1994, teaming with the Northern League’s Bossi to erect a stubborn ruling (and opposition) faction joined at the hip for more than 15 years with now-lapsed rightist Gianfranco Fini.

Asking Berlusconi’s insiders to act on festering disenchantment and mutiny is tantamount to going back in time and demanding that the Chicago Democratic Party machinery led Mayor Richard J. Daley dismantle itself for the common good. Berlusconi’s freedom people, like Daley’s 1960s Democrats, represent a sloppy but all-encompassing machine wedded to a chain-of-command and deferential to authority.

When Fini publicly took up rhetorical arms against his one-time partner, he was not only expelled from the party he’d only recently joined but also tainted and made into a political untouchable. His partners in breakaway were similarly ostracized, as was their incipient party. Though Fini remains a Berlusconi opponent, his sidelining from the inner circle has minimized his relevance.

What Berlusconi has managed to do — and it’s a rare trick in the European Union West — is to mimic the character of 19th century tsarist rule 200 years on. His latest incarnation, vengefully emboldened by the exposure of his in flagrante hedonism, combines doses of Peter the Great with that of Stalin, minus the murderous overtones. It’s no wonder his political best friend is Russian Prime Minister Vladimir Putin (soon to “re-president” himself), though Putin’s power-among-thieves network is more ample and systemic than Berlusconi’s.

But even if essayist and author Severnigni is correct in saying that Berlusconi’s power base is beginning to lose patience with its aging superhero, no one, and certainly no party, has so far asserted its feasibility as an alternative in the national elections that would likely follow Berlusconi’s ouster or abdication. What that means is that an Italian version of “Yes We Can” — as in yes we can get past Berlusconi — lacks a captivating figure to which both the jaded urban public and the hinterlands can turn, particularly those who live in the country’s crime-addled and neglected south (which relies heavily on government and European funding funneled through Rome and is unused to honesty). Instead, the Italian political system recycles faces by rote.

Then-Democratic Party chief Walter Veltroni embraced Barack Obama-inspired politicking before the 2009 national vote, attempting to channel the American Democrat’s people-power charm. But Veltroni was the wrong man for such an enterprise. The former Rome mayor’s abject defeat decimated what remained of the once-proud Italian left, since at loose ends.

Giulio Tremonti, Berlusconi’s suffering finance minister, once widely rumored as the potential head of an interim government should his boss be voted out or step aside, has recently fallen afoul not only of Berlusconi himself, but of economic bad tidings, including Standard & Poor’s September decision to cut Italy’s credit rating (that S&P mugged the United States in August tempered the fallout, since bad news from America helps ease domestic self-consciousness).

Still, the downgrade troubled image-conscious Italy. Sex scandals are one thing, but economic embarrassment makes the country look needy, hitting a still-raw postwar nerve. In explaining its reasoning, S&P labeled the Berlusconi government “fragile,” a peculiar assertion since its opponents have yet to assert an antidote to that fragility.

Opposition leader Pier Fernando Casini, who controls what remains of the country’s Christian political base, has renewed calls for Berlusconi to step down (“He should let Italy be ruled by someone who believes in her…”), but his protestations, like those of other peripheral parties chiefs and complaints from the country’s president, Giorgio Napolitano (who belongs to generation that pre-dated public vulgarity), make waves only among dyed-in-the-wool critics. The nuts and bolts Berlusconi’s party, weaned into translating all criticism into envy, are mostly immune to the hubbub.

Berlusconi has also moved to focus his all-conquering electoral populism inward, challenging his own party members to respond to (and resist) what he calls a highly organized, conspiratorial effort not only to discredit him but also to assassinate the moral and intellectual credibility of the party itself (“How much was this ‘gentlewoman’ paid for this nauseating interview?” asked a letter-to-the-editor commenting on one woman’s tell-all details of a sexual encounter with Berlusconi). By playing victim and rallying around those in similar predicaments — his parliamentary majority recently blocked a no-confidence vote against Agriculture Minister Saverio Romano, who is under investigation in Sicily for mafia association — Berlusconi’s party has circled the wagons around its boss, the prize that foreigners, intellectuals, leftists and jurists, predators all, are portrayed as seeking to destroy.

That these characterizations are absurdly theatrical makes them no less a battle cry among the hypnotized faithful, who whatever their underlying disdain and economic worries have been trained to avoid discord and suspect the worst from a judiciary that can make public hundred of hours of wiretaps before even bringing a case to court. The fight over the tone and methods of the Italian judiciary polarizes the country’s intelligentsia between a guerrilla left (the real one has vanished) that seeks Berlusconi’s head, and a muddled right, which abhors meddling investigations and still has too much tied up in the prime minister’s feudal holdings, in politics, media and business, to challenge him to a frontal duel.

“We are living day to day,” Deborah Bergamini, Berlusconi’s former personal assistant told the New Yorker magazine earlier this year, following regional elections in which the People of Freedom lost votes and mayors in a number of key cities, including Milan. But there’s no evidence this precariousness has since taken a turn for the worse, or that living dangerously does anything but amuse and bemuse Berlusconi (his “I dare you” tendencies further enraging vocal enemies, who expect conventional responses, resignation namely, to their highbrow calls for responsibility). That Berlusconi loyalists could potentially defect en masse, another idea the New Yorker presented as a possibility, suggesting it becoming “politically expedient,” has also failed to materialize.

Underlying this increasingly grotesque scenario is Berlusconi’s absolute determination to serve out his term, scheduled to end in early 2013, and the complicity of his party in furthering that aim. Its membership has been coaxed to any swallow castor oil necessary toward achieving that end. They know that betraying Berlusconi now, dumping a leader who even in his twilight is arguably Italy’s most powerful back room mover and shaker, would sabotage any chance at currying his post-office benediction and the facilitations such anointment carries with it. Making an enemy out of an elephant who never forgets is a bad idea, since those who know him well know Berlusconi will not simply fade away.

Of the 344 parliamentarians in his party, only a handful has confronted him openly, and those few who defected to Fini’s cadre a year ago have since half-apologized and sulked back toward Berlusconi’s tent.

If sexual malfeasance and institutional pseudo-corruption are standard issue political immorality, then the violation of loyalty, like family betrayal, is a more telling kind of badness, one that even murder-absolving Catholic repentance doesn’t fix. Second nature to most of Berlusconi’s foreign critics is a more Protestant approach, preternaturally constructed to humble Rome’s new age licentiousness and denounce its ethical shortcuts. These critics, while admiring Italy’s good-natured hospitality and human compassion, reject the expediency and relativism that governs Latin morality, unaware the two are linked.

Domestic critics walk a finer line. Author Severnigni, who has written a series of light-hearted books both bashing and exalting Italian habits and idiosyncrasies, was himself exceedingly careful in his Financial Times commentary. Italians, he wrote, were illusionists who bought into their own fantasies, and Berlusconi the “the ultimate escape artist.” There was no knockout punch. Instead, the prose just jabbed. “He may be starting to lose his touch,” Severnigni said of Berlusconi at the state of his piece, and at the end: “The time is surely right for the escape artists to make room for the professionals. This time, at last, I think it is going to happen.” The insufferableness shows, but little more.

The conditional approach — a language sprinkled with the “maybe,” “could be,” and the hesitant “I think” — is a centerpiece of the Italian mind, which as a rule prefers the passive voice to the active. All seek potential escape hatches, including Severnigni. The only person to damn the tentative is Berlusconi himself, who says what he feels like saying, does what he feels like doing, his appeal defined through his willingness to ignore the caution forced on the less powerful.

He is both tycoon and an alderman, deferred to because his managerial power stems from what Italians most understand: connections. He will step down, he says with a mix of confidence and defiance, only if his enemies vote him out, knowing he has nothing to fear from party loyalists, who have nowhere to go should they turn their back on him. Since 1994, Italian governance has been in some manner affected by Berlusconi. In all, he’s served a little less than a decade as prime minister.

The latest Berlusconi era, which began in May 2008, will not end with a sorrowful resignation (a Richard Nixon fantasy) or come in response to hectoring from Italy’s educated upper middle class, which rumbles daily as it did five years ago, and years before that.

All that can stamp him out is a party insurrection, a cleansing cancer of the willing. But such a “greater good” revolt, without total consensus, would put both its progenitors and the party itself in jeopardy.

Italy’s parliamentarians, like Italians as a whole, resist major change as destabilizing and shy away from taking up challenges that might pose a real threat to their personal and family stability and standing. As Berlusconi opponents preach to an ever-widening choir, there’s no indication his well-compensated People of Freedom intend to turn their collective back on their Tammany Hall mayor. They have too much to lose, and Berlusconi’s legislative terminus is too near at hand, now less than 18 months away, and the countdown has begun.