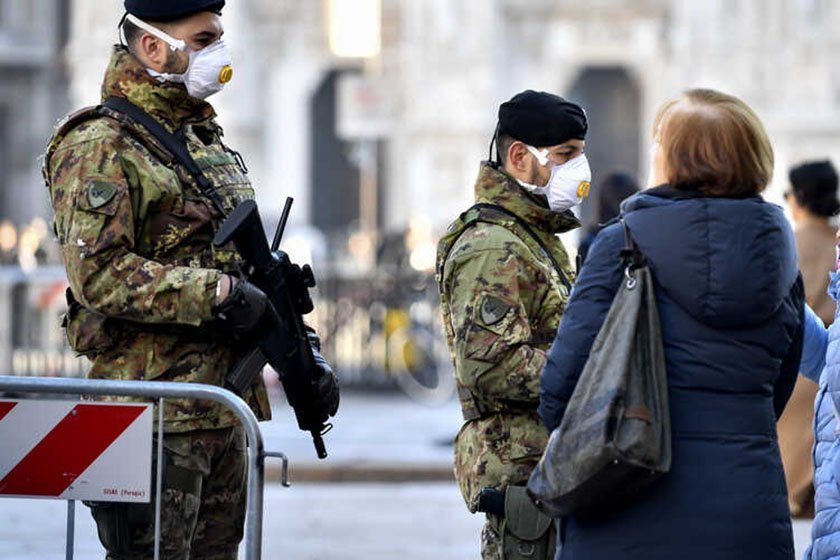 A new set of COVID alarm bells in Italy.
A

dvocates of the so-called herd immunity strategy to combat the novel coronavirus might want to take pause from their declarations and study what’s been happening in Italy since mid-September. Until that month, the country I call home had managed to contain the spread of the virus better than most other European nations, thanks to swift action earlier in the year. On March 9, it imposed a national lockdown, and stuck with it for three full months, only gradually tapering restrictions.

The virus doesn’t distinguish between young and old. It simply invades.

It basically did the opposite of what Britain’s Prime Minister Boris Johnson did early on. You may remember Johnson as among the earliest “get sick to get better” supporters, who actually told a national audience they’d be better off becoming infected. He soon after made a contrite U-turn, but by then his country was in deep trouble.

Italy’s sterner approach was the envy of Europe, if not the world, at least for a while. By June, the country felt giddy, and people began circulating more freely, thinking they’d slayed the dragon. But as summer ended, the country was hit by the second wave many had said was inevitable. But this one zeroed in mostly on twenty-somethings who’d contracted the bug partying or while on vacation.

Not cheering news to herd proponents who doggedly insist the virus is an old folks’ disease and all under 60 should resume life as it was, never mind infections. Really?

The mean age of the new wave of Italian cases was 30. Theoretically, this was the ideal herd scenario, the young getting infected, since they can handle the virus better than the elderly and as a result can help build up a wall of immunity.

But there’s a huge catch. The virus doesn’t distinguish between young and old. It simply invades, and awaits further opportunities.

Young adults, perhaps more than any other age group, do occasionally see their parents, eat in restaurants, mingle with friends, workout in gyms alongside older people. Close personal contact is a hallmark of Latin culture.

Just a month after the 20s took their hit, the average age of the infected jumped to just over 40.

Italy’s COVID-19 wards are reopening north to south, and the ICU patient population has gone from dozens (in mid-August) to 870 on October 20. The worst hit regions are Milan’s Lombardy (again) and Campania, whose capital is Naples.

The government has again cracked down, but its measures so far may not be enough.

In Lazio, whose regional capital is Rome, two-thirds of the dedicated COVID-19 ICU beds are now full, with some hospitals overflowing. For the first time since I returned from the United States from coronavirus exile five months ago, I sense the virus’s grip tightening around me. My Rome friends and patients are growing weary of being exposed to the risk and needing to ask for advice about symptoms and treatment.

Italy’s daily death toll, which has been under control, is only now beginning to rise again. October 20 was a particularly bad day, as bad as the United States’ was good — on that day the number of deaths per million was an identical 1.5 in both nations, only that the U.S. has more than five times Italy’s population.

Most of Italy’s new cases are within families. I’d like to believe that the young folk will be now have infected nearly all the relatives they can, which would mean the second wave is peaking as I write, but there’s no way to know. The country’s contact-tracing system has grown overwhelmed, and the government’s new restrictions fall well short of providing necessary reassurance. Prime Minister Guiseppe Conte has not ruled out a new lockdown, but has warned that such a move might be the straw that breaks the camel’s back (in economic terms). At the same time, some of the new restrictions are not in keeping with the severity of the problem. Among the decrees:

Worse, no systematic effort is being made to tutor households on how to isolate COVID-19-positive family members.

Still, Italy remains one of the best-off nations in Europe. The situation in the UK, Spain, France, and Switzerland is horrific. The same holds for much of Eastern Europe, including Poland and the Czech Republic. All over, plans to reopen business and commercial life is being pushed back indefinitely.

Even virtuous Germany, whose control rates are better than those of most other major Western countries, has announced curfews for bars and restaurants and imposed new limits on urban gatherings. Cases in Berlin are rising steadily.

Not a pretty autumn picture, with no sign of improvement in sight.

Fans of declarations advocating herd immunity need to give all this a good long think. They might also want to chat with the 40,000 dead Americans under the age of 60, or the thousands in the thirties, or those whose so-called mild symptoms may stay with them for the rest of their lives.

Declare all you want, but don’t think for a second the herd is on its way to save you. It isn’t.

My own guess, looking at the chaotic American situation, is that the applying of herd measures — basically letting people return to going about their business — would cost between 2 and 5 million lives.

“The cure can’t be worse than the problem itself,” Donald Trump said recently when asked if he supported the herd immunity strategy.

Original? Hardly. Let’s hope those who follow him, whenever they do, have a more grounded approach to what is without doubt one of the worst pandemics of the modern era.