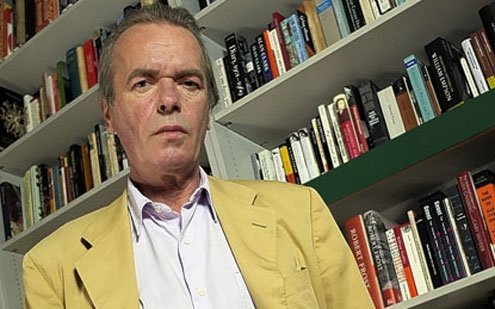 ooking back at the 1960s “sexual revolution” Martin Amis calls it: three wives and out. Quoting political essayist Alexander Herzen, he’s named his latest novel “The Pregnant Widow” — “the departing world leaves behind it not an heir, but a pregnant widow.”

A catchy title op. To deflect such justified reader suspicion, Amis weights his youthful control cast with an unusual number of adopted orphans, even a character born to a widowed mother.

Minor writer tics aside, Amis is virtuoso craftsman. He shuttles Keith Nearing from 2009 — to way back. To a traumatic summer spent with a mixed group of twentyish young, at an idyllic Italian hilltop castle. It’s 1970. When the departing 60s decade deeded such freedom from sexual mores and conventions that love and sex became fatally disassociated.

The opening to Keith’s summer recall is a glorious Grand Guignol scene. Starting their chance summer vacation, our anti-hero and two blondes — his lover Lily and the succulent Scheherazade — trod steep alleyways from castle down to the village bar. To join their neighbor Whittaker for a drink. But they can’t understand why their little walk arouses the local Italian males. The trio is “surreally surrounded (at a distance) by young men… all aflicker… shuffling and fanning out… the energy coming off them like an East Asian or Sub-Saharan prison riot” Whittaker later translates: “They were looking at: Two girls who forgot to put any clothes on. Nude.”

This “swinging-London” student naiveté is wonderfully funny. It could lead a reader to expect a prose farce, a comedy of manners. Not here. The cast’s clueless innocence is rarely even tragic-comic. Their summer is much more serious, and damaging.

While the boys are simply puzzled by this amorphous freedom, the girls decide to try-on the boy experience. Rita and Gloria insist: “I’m a cock.” Bad luck: girls and cocks are the high and low of the three fields of life. The middle field belongs to males, through simple inheritance. “That middle world,” Lily rages, “that’s reality.” NO ENTRANCE/HUIS CLOS/PORTA CHIUSA.

So very good at maneuvering a daunting lineup of actors, Amis easily flips Gloria from timid mouse, in plastic-skirted bathing suit, to the sexual provocateur who owns “all that arse.” With swift touch, he turns “quotidian” Lily upon her longtime lover, as she snarls: “Yours is smaller. Oh, much, much smaller.”

Yet there’s our anti-hero Keith, the guy with the “much smaller” tool, quite earnestly and futilely desiring all these women. He even starts reading the castle library’s English novels. Trying to figure how they explain women, through the centuries. He’s traumatized, though unresigned. But he has one interesting quality: Nearing views his summer cast as friends. He’s the sole actor here who genuinely likes his companions.

Eventually, this trusting loser will marry three of the young women with whom he passed that hot summer; a decade with each of the first two. As 2009 closes back on his aging face in the mirror, he’s in the seventh year of marriage to #3. And still friends with wife #2, and her new husband.

On the day that wife #1, now wrapped in amazing hijab, makes rather incredible reappearance in his life, she settles in a seat next to him in the local snug. There she reminisces about the bitter sex tricks she played. She gloats: “I ruined you for life.” Wrong. No one ever stopped Keith from loving. He alone mourns the death of others in that summer group, as decades pass. He’s as “near” to joining body and emotion as his generation seems to manage. His reply to #1 represents a small survival of our humanity. Within a tale of so much love and friendship gone awry. He tells her: “My memory loves you. That’s true.”

Maybe that’s as good as we get. Certainly Amis’s forensic exam of the post-60s generation is a fantastic parable, but painfully convincing.