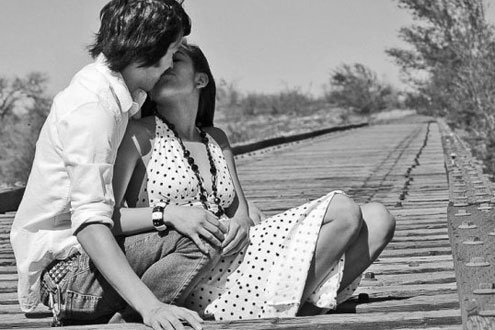 ove in Italy is unlike any other. It is not scholarly or well researched. It is not a persuasive love that arises from tomes with footnotes and a thesis. That’s American style, which starts with embers and grows to a controlled blaze. Italian lovers douse the flames with gasoline and just let it burn.

When American love ends, we study it endlessly, trying to determine exactly what went wrong; or how we went wrong. We throw a blanket of logic over what happened until its essence ceases to exist, leaving only theories peppered with facts. We now have experience, we tell ourselves. We have learned something from our failed loves. The most recent one, we think, only confirms what we already know. And so we file it away.

Italian love, on the other hand, hits you like a truck, blazing around the corner miles over the speed limit. It runs you over no matter how careful you are.

I remembered the first time it happened to me. It certainly didn’t make sense. We’d only known each other for a couple of weeks. When I sat curled in the passenger seat of his car with my head in the palm of his wide warm hand and my clothes a crumpled, colored heap at my feet, I didn’t recognize it.

When his message arrived the morning after, I assumed he’d sent me a song lyric because how could he possibly love me? He barely knew me. But therein lies the secret. He didn’t have to. By loving me he would grow to know me, and I him. After nearly two years, we finally knew enough that the whole picture came into focus. That’s when I chose to leave. But the love remained and months later I still ached for him against all reason. Given the ups and downs, I was happier without him, but a part of me would hurt until I loved again.

If you’ve never been in love like this, it’s easy enough to live without it. But Italian love is a virus. It stays in your blood. It can strike at any time. And if it does you’ll let it happen. The only difference is that the second time around you might see it coming. But you’ll still let it hit you, at least for a while.

Take Max and Angela. On the first night of her vacation in a small town on the Adriatic coast, she’d gone to dinner with a pair of friends at what, unbeknownst to them, was the restaurant Max owned. He passed by their table, and she stopped him to ask about the graphic T-shirt he was wearing. His answer was to pull up a chair and share stories along with his homemade passion-fruit liqueur. The T-shirt came from a café about 30 minutes down the coast, to which he invited them the next night. He was 20 years older than Angela, though it didn’t show. His manner and style said a youthful 40, which appealed to 30-year-old Angela, who was fresh from heartbreak caused by a seemingly mature 20-year-old.

Emerging from the restaurant restroom, she found him washing his hands. With a gentle hand on her shoulder, he stopped her. He said her smile lit the restaurant so brightly he couldn’t stop looking. Would she please have a drink with him after the restaurant closed?

Yes. Four hours later, as daylight arrived, she was wrapped in his arms and his sweater while he walked her to her friend’s house. Later, she fell into deep sleep rereading his messages about how he’d like to steal her away and show her all the secrets from water’s edge to inland. If only she would never stop smiling.

She welcomed his advances and absorbed his compliments. He was warm and fascinating; she was still hurting. When she looked into his eyes their second night, she realized he was also hurting. But more importantly, he had already fallen in love — with her. His attraction was total. He was painting a story for just for them that felt possible in every way.

Angela recognized it all in an instant. With American logic she put it to a swift — if artful — end to it, before the depths his affection would make any exit impossible. Had things been different, their romance might have lasted days or weeks or months, perhaps even years. She left with a renewed sense that isn’t love that’s ever out of reach. It’s us.