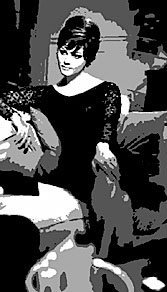 It's not being American so much as being “poco Italiano.”
F

irst there was Veronica. Here’s what Veronica did. When annoyed, which was often (my flattery as ever insufficient), she’d rush me home in her Renault Clio tailgating slower drivers at 100 kph on Rome’s Via Flaminia while proclaiming her enduring love for Brazilian race car driver Ayrton Senna.

This was fine except that Senna was dead. He crashed into a wall.

When we did emerge — my wardrobe suitably adjusted to permit such outings — I was forbidden not to focus entirely on Veronica. Glancing at other tables for more than three seconds was apparently a criminal act.

Well, darling, that man over there is Kareem Abdul-Jabbar.

“Ah, certo, me l’immaginavo americano, alto così…” Silly me: All Americans are 7-foot-1.

The lack of nourishment, she announced, was the reason I was so “nervoso.”

The worst of it, however, was lovemaking.

Never mind work requisites (my annoying trade was and remains journalism) or issues of mood. Any form of distraction was not an option.

Poor Veronica endured me for three months. Then, to her half-delight and all of mine, she entered politics.

Which brings me to Patrizia.

The moon, according to Patrizia, required company.

But the sea, oddly, required solitude. Patrizia refused to swim because the water temperature was always too cold and might provoke “un ictus,” a stroke.

Happens every day, said Patrizia, adamant. Her father was a surgeon and an expert on the menacing interplay between cold water and brain waves. Anyway, she added, “mi verrebbe un colpo di freddo…”

Patrizia informed me that hot-water showers in the early afternoon are a leading cause of sore throats among children. And sore throats can lead to death.

Well, I pleaded weakly, I was.

No, that’s not the point, argued Camilla. It’s not so much being American as being “poco Italiano.”

And just how could I be more Italian, especially since I was so defectively American?

What kind of work?

Oh, said Camilla, I could start by dressing better, buying a nice car, changing my eating habits and…