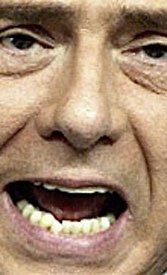 It’s no surprise that Berlusconi requires demagoguery to maintain his magnetism.
O

It might have been the ominous lure of the word: umbra, shade, the neuter of umbraticus, which is incomparably Latin.

In 1950s and 60s Italy, workers got boxes of pasta for Christmas, though the real gift was employment. Capricious chiefs ran patriarchal companies whose recruits and their families depended on casual benevolence. Labor laws, in their infancy, did little to prevent contagious servitude. Finding work in a hapless post-Fascist nation depended on family contacts and appropriate deference to authority.

A foreman might accommodate, that yes, but a boss was something else: aloof, perhaps in a blue chauffeured sedan, a matriculated God with entrepreneurial wit who could fire at will. If employees ever spoke to him, he was the doctor, the professor, the engineer. Italian neo-realist films throb with colorfully condescending mini-tyrants, some of them comic.

But it wasn’t funny.

The Italian postwar Left gradually installed a litany of ironclad social entitlements to offset the primacy of carpetbaggers. Beginning in the mid-1960s, it set aside Cold War ideology to fix the plight of menial workers, who were little more than indentured serfs, semi-literate and compliant.

Tentative, then emboldened, the Communist Party took on the father-figure class. Party expansion (allegedly buttressed by Soviet aid) fueled union growth and encouraged strikes. Soon, more moderate forces joined in, making Italy into a three-union country. Industrialists demanding of (and accustomed to) blind loyalty got the first taste of revolt. With the stranglehold of minders and foremen broken, workers plucked kinship from shared struggle. By 1980, they were all but “fire-proof,” as they remain.

Critics of Prodi (an economist and former prime minister in the 1990s) work from one text: The Left’s cohesion is illusory. It was artificially assembled to defeat Berlusconi. Even Prodi refuses to deny it.

Instead they attack Berlusconi as a contemptible charlatan, a revised version of the 1950s boss in the blue sedan bearing a supply of Christmas cappellini.

The schism is as durable as class system debate and stirs passions as venomous as the ones that divide supporters from critics of U.S. President George W. Bush, whose Anglo-Saxon interpretation of national destiny vaguely resembles Berlusconi’s peculiarly Latin brand.

The tight election has only sharpened resentment simmering since the Italian economy began its sweeping downturn a decade ago.

It is not ordinary fury but a rewriting of a left-right conflict from agrarian days. For the newly-convalescent Left (its last candidate, former Rome Mayor Francesco Rutelli, was routed), Berlusconi runs a loose family corporation that regulates media, decides whether to hire or fire, and adheres only casually to law. The danger, having won, is forgetting allegience and pledging to vendetta.

Berlusconi’s self-reverential vanity— he is a caustic tenor in love with his own voice — does little to dissuade the vengeful. He spurns the humility previous center-right leaders adopted to keep the Left at bay. He prefers being a human torpedo set to explode in an enemy harbor.

In victory or defeat, Berlusconi enrages the Left by personifying superior airs it presumably brought to heel decades ago. His fanatical bossiness reminds adversaries that privilege has been diverted, not superseded. Only Berlusconi so adeptly gets under the Left’s thin skin.

Parts of the country still yearn for a comic book strongmen and associate the left with “cooperative” thinking, which is to say undermined individualism. For backers, Berlusconi is cunning, rightly wary of judicial plots, a political gunrunner with a good heart.

The argument dirty enough to make class warfare fair game. Berlusconi now plays both boss and foreman (and hugely successful soccer team owner, which helps). He will go it alone against all enemies, he says. Be loyal to me, he urges. If his leadership is “stolen,” he will lead the opposition as a latter day pater familia anointed to keep ideologues from sullying his Italy. More than ever, he personifies a political hologram, the CEO of a projected self.

So no, he is not going away.

The wrath is seismic on both sides. Berlusconi and Prodi each vibrate at the sound of the other’s name. So do their denizens. The enmity is cut from marrow, not politics.

To the Left, Berlusconi is a disingenuous Frankenstein who doesn’t know he’s dead and kowtows to the United States to suit Italy’s ongoing inferiority complex. He’s held in the same contempt director Michael Moore reserved for George Bush in the film “Fahrenheit 9/11.”

On the Right, however, Berlusconi’s allies are distancing themselves from their man-child. Maybe, some murmur aloud, he is outliving his appeal. They know he’s taken a serious hit and that, pushing 70, he may not last another 10 rounds (despite lifts and reconstructions.)

The distancing, if it translates into a fragmenting of the center-right, may help Prodi — who must keep all of his idiosyncratic allies in line to govern effectively. Slumming won’t work if Berlusconi patrols the garrulous alleys issuing payback tickets.

Which he has implicitly vowed to do.

Writing recently in the International Herald Tribune, Roger Cohen (a Reuters bureau chief in 1980s Italy) made this assertion: “With the wealthy north voting for the right and the backward south for the left, the country’s historical divisions between a zone of productivity and a zone of state dependency have been exacerbated. Italy today seems split in two in just about every way a country can be: political, geographically, economically, and culturally.”

In truth, the north itself snapped (upper north to the Right, middle to the Left) while the south fragmented by region and township. But that’s not the point. “Wealthy north” and “backward south” are avoidable clichés: the south has hidden wealth (and an illicit system of distribution) while the north faces racial problems. Productivity and dependency, the legal and the approximate, associate constantly. Italy’s shifting status defies any solitary confinement into which pundits (including this one) would place it.

Neither center-left nor center-right governments have fruitfully offset the graft and corruption that keeps the para-employed Italian south secluded from Europe. System-beating remains both attractive and profitable. By in large, civics still has no authentic dimension in Italy.

It’s no surprise, therefore, that Berlusconi still uses demagoguery to magnetism. He attracts because of, not in spite of, his vanities, a variety show superstar in a pop culture based on soccer and television. He knows that to stay in the game in he must be invasive, vulgar, and above all present. He has the means.

These are lewd and crude times, perhaps too much so for Prodi — he who has the face of a sincere middle school grammarian.

Italy of the 1950s, poor and deferential, ignorant and hopeful, has come full circle. Part of it unconsciously desires umbrage and blue sedans, another wishes to mitigate the ridiculous. There is no middle ground.

Berlusconi may even determine how long the mitigating forces last. Can the Left survive his demise, should he falter? For now, the sides feed on one other and thrive. If Italy must be reduced to cliché, opera is a prudent choice. A first act advisor may vanish by the third. A peasant can become a diva. A suitor can falter. But what do you do without a villain?