It was so awks… 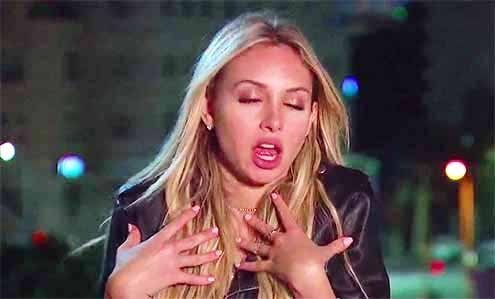 Corinne Olympios: Once upon a time on "The Batchelor."
I

’ve taken only one college anthropology class, but it was more than enough to instill the one key feature all cultures needs to survive: communication.

Today, many of these systems seem to have either broken down or wandered into uncharted linguistic territory. It might sound like I’m headed into political territory, but I’m not. While I’d like to be able to write an original, well-crafted column about how to bridge the American communication gap, I can’t. It’s not my calling.

My mission is another: to translate youth-speak.

Now, some of you may think you’re fluent in youth-speak because you have children. To this I respond, “Really Barbara? You think you know what Sadie meant when she called you ‘salty’ under her breath?”

I didn’t think so. But I — for the most part — do understand. Or at least I can ask my peers to explain without seeming like I’m trying to be a cool mom.

In the spirit of mutual comprehension and global tolerance, I’ve decided to decode a youth-speak snippet to give adults some insight into the language of the now.

Picture a group of girls at Starbucks, all listening to their supreme leader, and speaker, who we’ll call Tiffany.

“Anyway, y’alls, it was so awks. Cause, like, Kyle and I were totally vibing off each other but then his side chick Becky came into the pre-game and was, like, totally trying to kill my vibe.

“But I was like, not having it, cause like, Kyle and I matched on Tinder, so we’re legit. Becky only knows him cause she’s a Theta and he’s an Omega. But anyway, so I totally interrupt, like Corinne from ‘The Bachelor’ — by the way, who’s team Corn with me? — and I take a selfie with him, but like I didn’t take your grandma’s duck face pic, I totally went for the chill Alexis Ren Jay Alvarez style from Insta — by the way, I think they broke up. So the whole thing is totally back on track but then his frat bro Jake comes up and is all like ‘Hey Tiff, saw your snap story, did you really get that turnt on Thursday?’ Can you believe it?

“Of course Kyle like totally freaks out cause I told him I was going to Netflix and chill but like my Snap Story — and my Insta story —were like totally lit!”

Don’t fret if none of Tiffany’s excited pronouncements made sense. Here, Barbara, is an accurate translation.

“Anyway, girls, it was really uncomfortable because Kyle and I were getting along really well until this other woman, Becky, approached us at the party-meant-to-rile-us-up-for-the-main-party and pretty much intruded on Kyle’s and my moment.

“However, I was not in the mood to be trifled with, especially since Kyle and I knew we both liked each other since we matched on this dating app that everyone now uses, whereas Becky is simply in the sorority Theta and Kyle’s in the fraternity Omega. That being said, I decided to stick to my guns and interrupt their own conversation in the same way this very bold and frankly a little wild person called Corinne does on a show where a man tries to find love by dating many girls at once on national TV — by the way, are you all supporting Corinne like me? — and I decide to take a picture of Kyle and me. Despite what you may think, I didn’t take the average photo where girls pout in a way that’s meant to make us all look like we have model cheekbones, but instead, inspired by two young people — Alexis Ren and Jay Alvarez — who used to date and made their relationship famous on Instagram (the app where people you follow upload photos with captions). Although, since they haven’t posted a photo of themselves together, I suspect they’ve broken up, despite them being what I aspire to in a relationship.

“So, Kyle and I are getting along well until a friend of his from his fraternity, Jake, approaches us and says ‘Hey Tiffany, I saw the videos you posted on Snapchat (the app that only saves images for a short while after you’ve seen or sent them), and it looks like you had a very rowdy Thursday!’ A that point, Kyle grew very concerned because he felt misled as I’d told him I planned to stay in and watch television and relax but my Snapchat Story (a part of that same app) — and my Insta story (same concept, different app) — told a very different tale.”

This, in short, is what your teen or college kid is saying, or might be, at least if Tiffany’s around. I’ve admittedly put myself at a great risk by giving you these inside details. Why? Because some parents eager to venture into their children’s cool world might try to absorb this patois. I urge tempted adults to resist. Appreciate what your children tell you and leave it at that. If they want you to understand, they’ll speak your language.

As they say in all movies in which people are tempted to go too far, “It’s a powerful weapon, use it carefully.”