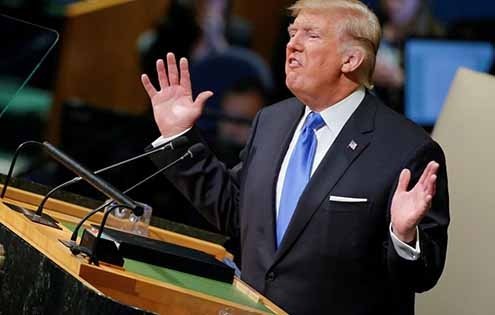 For the first time in recent history, there's no knowing what the president is thinking, let alone what he'll say next.
L

ast year ended with a major victory for the Republican Party. Though generally unpopular with voters and riddled with unclear provisions, the Republican tax bill allowed GOP leaders to enter 2018 focused on new priorities.

This sense of a clean slate also carried over into White House, which will seek to move past a tumultuous 18 months. Entitlement reform and trade with China are in line to become major topics ahead of November midterm elections.

Among the reasons the Trump Administration can turn over another leaf is that the reigning news climate ensures no one story dominates the headlines for any length of time. Trump’s penchant for tweeting and his scandal-friendly character means Washington takes things day to day. Each morning come new issues and presidential errors — both forced and unforced — along with the attendant media attention. Discussion is saturated by whatever came up one week, only to be quickly replaced by a new set of talking points. Russia scandal revelations follow this pattern. After each new investigative report or leak comes a few days of pressure, until a new furor intervenes — over private jet fees or unqualified judicial nominees.

Moreover, because Trump tends to act impulsively, he can quickly bring completely new issues into the spotlight. Many weeklong debacles —such as the Islamophobic videos he shared in late 2017— happen without forewarning. Twitter-Trump can’t be predicted.

This approach to governance does foreign policy no favors. Not for lack of trying, but because foreign policy also works day to day. Decision-makers lack a comprehensive strategic vision, which would enable consistency and predictability on a variety of issues. In a prescient op-ed piece preceding Trump’s inauguration, Obama advisors Colin Kahl and Hal Brands noted that the contradictions and poorly thought out assumptions embraced by the Trump team would result in a “rough ride” and general uncertainty in the conduct of foreign policy. The Middle East is a good example. The Administration has offered conflicting policies toward ISIS, Iran, and Saudi Arabia. There has been a notable lack of strategic clarity. Some policies have changed direction on the fly, reflecting a disorganized and at times incoherent worldview. The newly released National Security Strategy is unlikely to smooth out daily policymaking.

There’s a deeper problem. While Trump has adjusted foreign policy to suit his mood swings, U.S. partners and adversaries around the world have not adapted to his whimsical approach. While an offhand presidential remark casting doubt on the United States upholding its NATO Article V obligations to protect allies might lead to week of recriminations in Washington, in Europe that same remark will have far more serious consequences, leading some states to reexamine of the transatlantic partnership.

Similarly, while the U.S. decision to withdraw from the Paris Agreement on climate change might seem like ancient history, its effects are still playing out. Around the world, countries are working to build global institutions that exclude the United States.

The disorganization at the heart of the Trump Administration has also increased the importance of external factors in determining pressing issues. Unable to chart a coordinated foreign policy course, insiders have taken to reacting to specific provocations — such as North Korean missile launches — and to focus on hard deadlines. In the case of the Iran deal, the maze of waivers and certification requirements needed to uphold the U.S. side of the agreement has forced Trump officials to make decisions at regular intervals, no matter how haphazardly they were reached. In October, faced with an expiring certification, the White House decided not to recertify the deal. The move gave Congress 60 days to take expedited action and potentially sink the deal. The Hill missed its mid-December deadline and the power is now back in the Administration’s hands. By mid-January, Trump will have to decide whether to re-impose sanctions or waive them. This decision will give him the opportunity to sink an Obama-era agreement he has regularly criticized but has so far not scrapped.

But the reemergence of the Iran deal also shows the ultimate pointlessness of the Administration’s seat-of-your-pants strategy. Much like the climate decision, the October announcement on certification produced criticism of the U.S. abandonment of the global liberal order. But it faded. Yet in truth Trump did nothing in the way of solving the Iran issue. He just punted it.

But the Iran deal differs from the climate change accord. It is highly formal, with mandatory issues and deadlines to be addressed at regular intervals. This will compel Trump to continue making decisions, which, without a credible strategy or overarching rationale, are likely to seem like rushed and ad hoc choices. It’s a potentially vicious circle.

In foreign policy, an Administration without a direction is vulnerable to any number of outside factors. Officials are buffeted by unplanned presidential pronouncements, unpredictable actions by enemies, and timetables to which they must stick even if the matter at hand hasn’t been fully considered. Policymakers will have anything but a clean slate. The effects of their rushed 2017 decisions are still generating debate on the world stage. In that sense, 2018 will not offer a chance to start anew.