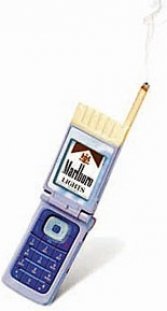 But can you get it up?
L

ast summer, on the eve of her sixteenth birthday, with chocolate-colored hands propped on svelte chocolate hipbones, my niece announced to the family that she smoked 10 cigarettes a day by her count. She’s not stupid. She knows that smoking is bad for her. Her anti-smoking education must have started early, because it was she who persuaded her mother to quit smoking about a decade ago. She said, “Momma, I don’t want you to die.” That ended a 20-year habit.

Between a quarter and a third of teenagers smoke in Italy, according to the tobacco board of Italy’s national institute of health (Istituto superiore di sanità). They do so despite parents, despite teachers, and despite warning labels on cigarette packets big and bold enough for the legally blind.

The allure of cigarettes is insidious.

They’re edgy, cool, a cabalistic rite, a shot of charisma. They’re also terribly enjoyable, if you manage to inhale without coughing. And they’re addictive. Smokers are more dependent on cigarettes than junkies on heroin, according to the National Institute of Drug Abuse in Washington D.C.

Anti-tobacco communications hammer away at two themes, health and social cost, which have the advantage of being honest and direct. Since it kills 85,000 people a year in Italy, cigarette addiction is the biggest preventable cause of death here and almost everywhere else. Before death, the consequences of smoking often tortures and disable its victims. It also causes other indignities: impotence and infertility, stained teeth and fingers, a rocky voice and wrinkled skin. Smoking must be stamped out like a pox.

But health is not usually foremost on any smoker’s mind, much less a teenager’s. Nor do smokers count the pennies they cost society.

Someone or something needs to speak to adolescents, to the rebels and the trendsetters, particularly when they seem least reachable or rational, which is when they run the highest risk of getting hooked. If such speech worked, we might end smoking within a generation, because the cycle could stop with them.

With that in mind I’d like to propose a new communications approach. Something we could do now, without awaiting a fix from official communicators or law enforcement. We could engage in guerrilla warfare, a low cost campaign of character assassination. We could spread the word that cigarettes are for losers, that they’re disgusting and a waste of money, that they kill male performance, that they make girls ugly, that they’re predators on friends and family, and, if absolutely necessary, that they bring bad luck. In short, create a new taboo.

If you don’t like negative campaigning, try the opposite: Non-smokers win in love and sports, they’re richer and more successful, and so on. What’s important is to help cigarettes meet the same end as spittoons, duels, and body odor — to render them uncivilized and obsolete.

One could start with cheap, easy chain SMS messages. I don’t think they have to be brilliant, just loaded enough to get passed along. If you have a teenager willing to do some sending — or to give you a cell phone list to send to from your id-blocked cell phone — you could help yourself to these messages or create better ones of your own.

1. Studies have shown that more smokers can’t get it up. Really. Tell your friends before it’s too late.

2. Smoking ruins your skin and teeth. It also makes you fat when you try to quit. Pass this message on to your dearest friends. They need to be warned.

3. Wear a black ribbon for someone close to you who is (or was) a victim of smoking. Express your solidarity and pass the message on.

Chain email messages can be written and forwarded with similar content, although funny and rude multimedia attachments tend to have more legs. Here are some ideas for cheap multimedia spots. (I’d be happy to produce them if anyone wants to fund them.)

1. Teenage crowd smoking together in front of driveway of a residential building. The driveway opens, out emerges a sleek looking guy on a new motorbike with a gorgeous girl on the back with various gifts: bracelet, bouquet of flowers, etc. Guy takes off, gang members look envious and gawk.

2. A sexy girl with a lunch tray walks toward an empty seat in a crowded restaurant. She’s about to sit down when a guy next to the empty seat lets out some wind. The girl, disgusted, finds another empty seat. But a cloud of cigarette smoke lingers there from a good-looking manb who is smoking nearby. She turns around, walks back to sit down next to the man who farted.

Stickers could be placed wherever a teenager is likely to park a scooter or bicycle: near schools, pizzerias, under-age discos. If you think of any clever slogans, please share them. My one idea is in just as poor taste as the restaurant spot, so I’ll spare you the details.

But you get the idea. Exploit vanity, insecurity, love, sex appeal and superstition. Make the message relevant to teenagers now, and it’ll pay for generations to come.