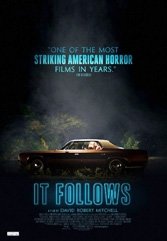 Jay (Maika Monroe) is an insecure teenage girl who lives in a suburban Detroit neighborhood with her sister and (never seen) parents. Smitten by the attentions of suitor Hugh, she has sex with him. Silly girl. The encounter cues director David Robert Mitchell’s coming-of-age horror movie in which visions of a stalking, body-shifting ogre are a kind sexually transmitted plague that plays on all manner of teen anxieties. Contagion complete, Hugh eventually explains he was only trying to purge himself of the ghoul and encourages her to sleep with others in hopes of paying it forward. Mitchell has his hands in a bottomless duffel bag that includes the perils of sexual promiscuousness, teenage anxieties, and the traumas of puberty rites. He spikes his movie with a retro feel: no mobile phones, no text messages, 1950s black-and-white sci-fi horror on the family TV. Is what’s Jay follows “real” — it would seem so — or a collective projection of teen angst and the paranoid side of intimate self-discovery? Despite the apparent presence of murder victims, the response remains intentionally blurred.

This STD-spiked horror-anxiety has a beginning but no end, except perhaps Jay eventually seeking resigned comfort in the presence of the chaste boy who kissed her first, suggesting the friendship and loyalty as a defense against recklessness. As metaphor, all this interesting for a while; as horror its menace soon recedes into repetition. Jay is no more or less scared throughout; the “following” ogre, or ogres, no closer or further away; their goals obscure. If casual sex can kill, it doesn’t seem to have a motive aside from its own imperiling symbolism, a theme that eventually haunts itself out.