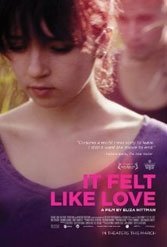 Writer-director Eliza Hittman’s coming-of-age film sits on the jagged edge between diffidence and promiscuity. Lila (Gina Piersanti) is a 16-year-old Coney Island girl whose best friend Chiara (Giovanna Salimeni) is sexually active and has an omnipresent boyfriend, the two of them putting on intimate displays. Lila is curious but diffident; formed but immature; older than her years but unable to match Chiara’s sexual boldness. Until she meets laconic, tatted up college-age Sammy (Ronen Rubenstein), whom she tries to wrap herself around. Lila disparages Chiara (“She’s needy…”) but wants to need someone of her own.

Hittman slowly and deftly reveals physical and emotional anatomy, digging into the awkwardness and bluster that make the teen years so absurdly bold. She lets Lila’s feelings grow without contrivance, zeroing in on the wish to fit in, which is most at the mercy of the sexual precociousness that defines post-modern courtship. Lila is dazed and confused and submissive, the perfect teen hormone. The boys around her are rap brutes, or style themselves that way, eager to sip from their welled-up testosterone.

That said, Lila’s unfolding (and its miniature consequences) is a slow and predictable affair. God may be in the details, but here those same details go round and round like a Kabuki carousel of still life images that while at times poignant and affecting broadcast a sameness that leaves its little women little room to do much else beside squirm.