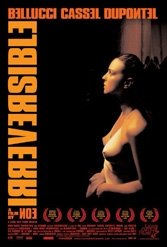 This is about how malice, once ignited, is fire to silk. Alex (Monica Bellucci) is raped, beaten and dead. Lover Marcus (Vincent Cassell) and friend Pierre (Albert Dupontel), also once Alex’s lover, are introduced while hell-bent on finding the pimp behind the killing. They tear through a nightclub (hand-held-camera is the rule) and brutalize a man — the wrong man.

Argentine-French director Gaspar Noé’s movie adopts a clinical back-to-front structure to deflect knee-jerk value judgments. He tracks backs to the dingy passageway where pimp Le Tenia (Jo Prestia) assaulted Alex in a scene more primeval than pornographic. Noé is so tuned in to the tactics of humiliation that he, not the movie, seems caught in the act. Le Tenia goads Alex, who parries back. For a time she seems to have dodged the worst. But the power shifts again, and what follows is unbearable.

Called upon to show rape as a crime about power and control, not sex, Noé does the unprecedented: he proves it visually. As the story arcs back further — Alex’s tender, provocative, sexy life with Vincent — the circle is squared. Noé’s film is brilliant, mesmerizing, and heinous. Therein the problem. The awful terminus known, few want to board this bus. And who can blame them?