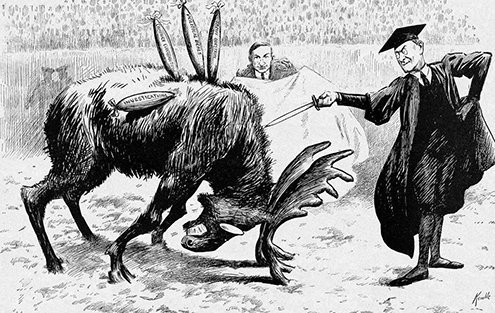 This 1912 cartoon in "Harper's Weekly" portrayed Teddy Roosevelt as the moose and Woodrow Wilson as the professor. In the background is Wilson's campaign manager.
M

y research into Woodrow Wilson and the four-way 1912 presidential campaign for a Youtube channel dedicated to World War I coincided with both the Republican and Democratic conventions. It is an election worth remembering.

Former President Theodore Roosevelt, frustrated with incumbent William Howard Taft, quit the Republican Party to form the Progressive Party -unofficially known as “Bull Moose” because Roosevelt said he was as tough as a bull moose – leaving incumbent Taft as the official Republican nominee. Wilson represented the Democrats while Eugene Victor Debs, founder of the Social Democratic Party, ran for the third time.

Roosevelt and New Jersey Gov. Wilson, both perceived as progressives, were considered the frontrunners. The two politicians shared the belief that the world was growing increasingly complex and interconnected. They championed the need for federal intervention in issues too complex or outside the reach of state control. In their eyes, the government should regulate large corporations and financial institutions whose interests crossed state lines. That included national transportation and communications networks such as railroads. They believed in conserving federal lands — national parks — and safeguarding the rights of workers and children, who at the time had little official standing.

Taft’s Republicans, and those of the period, tended to represent northern voters, most of them urban and well-educated. Its influence also extended to the black vote, seen as loyal to the party of Abraham Lincoln.

During his 12 years in office — Roosevelt took over the presidency in 1901, after the assassination of William McKinley, and held it through 1909 — he championed the so-called Square Deal domestic program. Roosevelt enacted legislation that curbed the power of big business, reining in the railroads and trusts that controlled steel and oil production. He introduced social concepts such as consumer protection and oversaw the creation of the Food and Drug Administration.

Former Princeton president Wilson, the opposite of flamboyant, owed his New Jersey ascent to the Democratic machinery. At first, he was seen as little more than a political tool in the making.

But he refused to play the game.

In New Jersey, Wilson banned corporate contributions to campaign financing and stood up for consumers and workers by creating a public utilities commission and introducing workmen’s compensation.

Once on the 1912 trail, Taft was lackluster. The fiery Debs, who had led a crippling and brutal transportation strike, lacked national electoral clout.

As the campaign wore on, Wilson, who had emerged as the unlikely Democratic nominee only after a divisive convention stalemate, warned it could “easily degenerate into a mere personal contest,” since he and Roosevelt held common positions.

He was right. The 1912 race became a personality contest between Princeton schoolmaster Wilson and war veteran Roosevelt, who prided himself on having served with the famed U.S. cavalry Rough Riders in the Spanish- American War. Roosevelt’s campaign staff tried making an issue of Wilson’s alleged affair with an attractive widow. But Wilson’s moral passion and mastery of issues — he was the original policy wonk — kept him above the fray.

The campaign was personal in another way. Reaching voters in the pre-radio era meant getting your message across through newspaper reports or visiting voters where they lived, by train.

Wilson carried his own suitcase. Taft enjoyed quiet black-tie dinners with friends and supporters. All candidates spoke from notes and often extemporaneously. They mingled with crowds. Occasionally their paths crossed. When Wilson and Taft stayed at the same hotel in Boston, Wilson refused to ignore his rival, seeing it as rude. The two shared a brief chat about the stress of campaigning.

Low tech did not mean low drama. Roosevelt was shot in the chest while leaving a Milwaukee hotel. He was saved, literally, by his glasses’ case and the thickness of his speech. The bullet stopped short of his lungs and he actually gave the 50—page address, making the most of his reputation. “Ladies and gentlemen,” he began, “I don’t know whether you fully understand that I have just been shot, but it takes more than that to kill a Bull Moose.” He was out for only two weeks.

Taft had his own rough ride. Six days before the vote, his running mate James Sherman died, forcing the Republicans to find a replacement.

In general, black media outlets backed Taft. Though Wilson did court the black vote, he snubbed black leaders and later presided over the segregation of federal offices.

As president, Wilson would pursue the progressive policies begun under Roosevelt. He introduced federal income tax, the Federal Trade Commission and the Federal Reserve system. Issues central to the 1912 election, such as the government’s role in daily life and the states’ rights, now divide the two sides 114 years later.

In 1912, Wilson focused almost exclusively on domestic questions. “It would be the irony of fate if my administration had to deal chiefly with foreign affairs,” he said at one point. In 1914 Wilson was handed the mother of foreign affairs, World War I.

Today, the way he handled it remains his greatest legacy both at home and around the world.