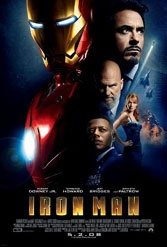 At his best and most entertaining, Robert Downey Jr. dishes out dry wit, sarcasm and comic posturing as if he’d patented the trinity. Whether can fit a superhero corset is an intriguing question. Here he’s übermogul hedonist Tony Stark, genius scion of an American weapons-making dynasty. “We’re ironmongers,” says duplicitous sidekick Ollie (Jeff Bridges). Ambushed in Afghanistan after demonstrating his company’s latest killing wares, Stark is rescued by a good guy doctor who implants him with a lifesaving electromagnet where his heart should be (think The Tin Man). Problem is, the bad guys now have him. And they want his missiles.

Back in the U.S. of A. (“I want an American cheeseburger…”), the reconstructed Stark goes liberal: Hawk turns to dove. “I have more to offer this world than things that blow up…” And Stark-Downey takes 2.0 flight (backed up by Gwyneth Paltrow as loyal personal assistant Pepper Potts). Bang-up action meets labor-of-love fun. Smithy Stark goes back to work, this time ironing up in defense of the downtrodden. His comic chitchat with inanimate things is on par with the trash-talking friendliness Harrison Ford made his own in “Star Wars.”

Iron suit made and Juju done, battle awaits with corporate turncoat Ollie (“I finally know what I have to do and I know in my heart that it’s right…”) Saying much more spoils a silly putty ride that both confirms Downey’s superhero wager and upholds the best side of comic book irony. Despite his “long list of character defects” (tongue-and-cheek allusion to the actors own sins), deadpan Downy is worth iron and more. Stay away from sequels.