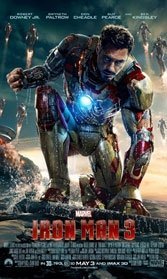 There’s no better way to kick off the summer season than with another entry to the Marvel movie almanac. These mealy capers don’t offer much for the brain cells, but they do give the popcorn-pinching masses a good night out. While “Iron Man 3” doesn’t dazzle like “The Avengers,” it does tick all the boxes on the action sheet.

This time round, Robert Downey Jr., reprising his role as tech magnate Tony Stark, must fight to get his life back after his world is torn apart by the cataclysmic force of The Mandarin (Ben Kingsley). Though Stark usually relies on his suit, he has to manage without it for a fair chunk of this picture, making things interesting. It’s a fresh take, yes, but in the end it’s business as usual for the sharp-tongued hero.

In theory, the blockbuster picture is a viable art. But without enough thought its entertainment value can wane with every new release, something that’s plain to see from Marvel’s lucrative Iron Man franchise. Token chuckle-worthy comedy aside, the film is infected with complacency. It’s a horrible infestation that compels producers to sacrifice artistic integrity for their proverbial pockets. Tired plot tropes and a slew of damp characters dilute the talent.

It’s nearly as hard to care about Gwyneth Paltrow’s Pepper Potts as it is to believe she once won an Oscar. Even Stark’s artificial companion, Jarvis (Paul Bettany), is livelier than Pepper. The dead-dull recycling of Don Cheadle in the periphery does little more than provides another verbal punching bag for the brilliant Downey Jr., whose luscious charm keeps things watchable. Kingsley also dazzles as the dubious warmonger.

Iron Man 3 isn’t great, or even very good. Instead, it’s the same old rubbish. Rubbish we all guiltily enjoy.