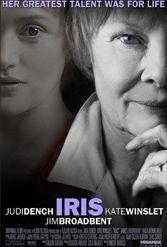 Just as there’ a thin line between sensuality and voyeurism, a similar membrane (in film) divides realism from pathos. Richard Eyre sets out the chronicle the plucky life of writer Iris Murdoch and her lifelong relationship with husband John Bayley. He stylishly captures their early romance, an intellectual two-step, with Kate Winslet and Hugh Bonneville in the leads.

Later, when Murdoch’s existence sours into Alzheimer’s, Judy Dench and Jim Broadbent take over. Murdoch was a powerful woman, and Eyre does her in good stead with the Winslet-Dench/Bonneville-Broadbent pairings (Broadbent is particularly poignant).

What’s vulgar is the exaggerated dalliance with the effects of degenerative disease. Eyre’s well-intended realism feels more like being at a speedway awaiting (and getting) a crash. And to what end this loyal attention to mental decay? Are we made better or uplifted for Murdoch’s travails? The last 20 minutes is the cinema of privacy infringement, with decay substituted for egregious sex or violence.