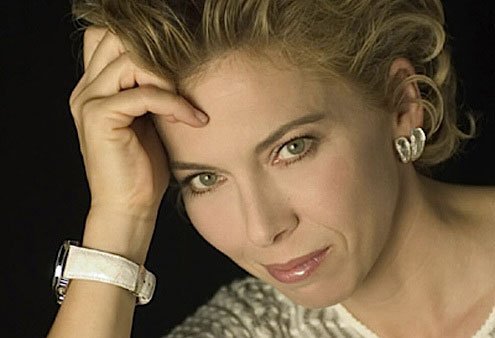 Pivetti has adopted a variety of TV looks...

Among the more intriguing professional women in Italy, Milan-born Irene Pivetti joined Umberto Bossi’s controversial Northern League early in her political career and was elected the youngest-ever president of the Chamber of Deputies in April 1994 at age 31. At the time, her youthful image was symbolic of Italy’s break from decades of Christian Democratic and Socialist party leadership, which had been rocked by corruption scandals. She later joined the UDEUR, Italy’s Christian Democratic-leaning and pro-European center-left party, ascending to its presidency. But she abruptly dropped out of politics in 2001 to dedicate herself to journalism. Sporting trademark short-cropped hair, she has since hosted a daytime television talk show on Mediaset’s La7 called Fà la cosa giusta, “Do the right thing.” Pivetti, once an honors student in literature and philosophy at the Catholic University of Milan, is also Institutional Relations Director at Reti, an Italian political consulting company that is active in trying to regulate lobbying. She is married and lives in Rome, where Paul Virgo spoke to her. Here are excerpts from their conversation.

House Speaker Pier Ferdinando Casini said that Italy’s problem is an overdose of cynicism. Do you agree?

Yes, maybe. We know too much about everything. We have too much history and we have periods of political tiredness. We’ve been doing politics for a long time and so we have to oppose [everything]. This leads to great political weariness. …We are very Byzantine. We invented Roman law, then we learned to govern by taking account of the experience of the eastern empire, which is the great Christian Democrat school at the end of the day. This is a great virtue because it’s at the base of diplomacy. … But on the other hand, you must have a little innocence, a little idealism and heart. Otherwise the result is suffocating and makes you lose love for politics and the state. We are often between these two things — a political cynicism that comes from having … seen it all before. In this sense, Romans are the paradigm for all Italians, the most cynical people in the world. It has to be that way. You live in the same city where all the emperors of the world were born and grew up. When you have a coffee or buy the news-paper next to the dome of St. Peter’s every morning, you are not impressed by it all any more. We’ve seen and done it all.

Is this kind of cynicism the biggest problem for Italian democracy?

The problem is that we are living [cynicism] badly. There is a certain distance from politics. … Richness and wealth distances people from politics, and on average we’re rich (obviously and unfortunately, there are many poor people, but in general we have been a rich country for two generations). We’re also still very stunned by the fall of the Berlin Wall. After 15 years we still haven’t recovered. …We had a European dream that was born as an antidote to the Soviet bloc. We still haven’t found our road [since the Wall fell]. Paradoxically, [even] European unity … loses it significance: Because we are not able to find profound reasons for being Europe. In the final analysis Europe exists when it argues with the Americans.

So European identity is based on anti-Americanism?

Naturally, no. But we struggle to find other points of commonality. It’s like Italians who realize they are patriotic when the national soccer team plays. It doesn’t mean you detest the others. But when you finally have a sparring partner, you realize you exist. It’s not that a European model does not exist. It’s just that at the moment we aren’t able to bring it out — unless we argue. So the Americans make war and we do the peacekeeping. Look at the Balkans.

Was it disillusionment that made you leave politics?

I entered politics at a very special time, at the start of a decade [the 1990s] of great change — a decade that, as an Italian, I’m very proud of. We revolutionized our institutions in a democratic way. Czechoslovakia became two states. Yugoslavia became five with the war. They reorganized socially. We did the same without war, which was not always a sure thing. … There was a moment when Italian history short-circuited and people went from street [protests] directly to the institutions, hundreds of people who had never been involved in politics entered directly into parliament, me included. Now things are back to a more normal rhythm, it’s another lifestyle. I don’t love party committees, and so on. I’m just not good at that sort of stuff. I recognize that.

Why do you want to regulate lobbyists?

Very few European countries have legislation about lobbies. Lobbying in Italy exists, but it’s not a great concern. When there were big parties they acted as the intermediary between society and institutions, so lobbying wasn’t a professional activity. But big parties have been gone for a decade. … So, we’re heading for an Anglo-American system where you have professionals who work with the institutions. … We don’t want to set rules on how lobbying is done, because [it] can be conducted by anyone: I’m a journalist, others are lawyers, accountants, and so on. If I, as a lobbyist, have relations with politicians outside parliament, at their home even, that’s regulated by civil code. But the moment I step into parliament, rules are needed. Currently, to speak to a member of the parliament I have to be accredited, say, as a friend or an in-law, or a journalist. This is unprofessional because I’m really going in as a lobbyist, not a journalist. I’d like this to be clear and transparent. We want access to parliament the same way as the media. At the moment, big companies like Fiat and Telecom get their people in while a smaller one is denied. What’s the criteria? We’re asking for criteria.

Foreign journalists who criticize Italy often measure it against Britain or the United States. But Italian commentators often do the same.

If I worked as a journalist abroad, I’d probably find everything better in Italy. The problem is with Italian journalists who tend to love all things foreign. It’s a provincial attitude that shows a lack of awareness of our qualities. I don’t like [it because] it’s a weakness of character. Doing things the English, French or German way becomes synonymous with doing things better. But then, when we go abroad, we crave our pasta.

You’ve undergone a radical change of image, transforming yourself from a seemingly conservative politician into a racy TV host.

I’m the same, but I’ve matured. … I never backed away from confrontation [but] sometimes I went looking for [it], which is useless. The values I believed in then are the same now. I believe in the primacy of the people. I work as a journalist the same way that I worked as a politician. I start with people. I love them and I like making popular television programs. I learned to love the state by being House speaker and I love it now. It’s a common asset and should be defended. The change of look is because I was in an institution and, like the police, I had to wear a uniform. I’m not there any more so I’m free to dress as I please.

What reactions did this transformation provoke?

I had colleagues in parliament who thought I’d gone crazy, that I’d made a mistake. In part, because I did something nuts: I resigned as secretary of a party a month after the congress. In Italy you don’t do that. But now they start to see that the change had a sense to it. I was only 38 and I was young enough to turn my life around. I could have chosen to live like a fossil.

There are very few women in Italian politics. Do you ever feel guilty for having abandoned the cause?

Absolutely not. I gave blood, everything I had. If I’d stayed on any longer, I’d have been taking not giving.

Why are there few women?

It’s in the mentality of men and of women. Many women give up easily.

Italian women. Many are right [to do so], because you have to do a cost-benefit analysis. With the evening meetings, the continual travel, the difficulty in having a child: it has to be really worth it. … Also, some women enter politics and then don’t want the responsibility. Women have to get it into their heads that it’s no good just being there: It doesn’t matter if there are lots of us, you have to take command and assume positions of power. From there you can generate more space for women in politics. I don’t believe in women’s solidarity. It’s a male invention. We don’t need it. Nature made us that way. Men have solidarity with each other. Before they went hunting, now they play soccer. It’s the same thing. They are strong when they’re in a group. We’re more individual because we’re made differently. We had to look after the family when the men went hunting. Now, we are the ones who find solutions that hadn’t been thought of. These are individual qualities, not team qualities. We can be part of a team, but we’re not necessarily stronger in a team. Men are.

But that doesn’t explain why there are fewer women politicians in Italy?

Women are not associated with power. People have difficulty imagining a powerful woman, and women are rarely made president of important institutions … [except] for reasons of image. Men think, “It’s just a woman, what can she do? She’ll leave me to get on with my business.” It doesn’t always work out like that. Sometimes they get it wrong. I was made House speaker and I wasn’t the woman they expected, tougher than forecast. I appointed [Letizia] Moratti as RAI president. She wasn’t the woman they expected — also tougher than forecast. Sometimes there are women with a lot of character.

Does having few women in Italian politics cause problems?

I’m not among those who thinks politics would be more peaceful and honest [with more women]. I think women are more ferocious than men. They just choose their targets more carefully. If there are ten things to discuss, men will argue about all ten. Women will argue only about the tenth, but then there’ll be a dead body at the end of it. I don’t think there would be fewer wars if women ruled. Or maybe there would be, but the war that would happen would be one of total extermination.