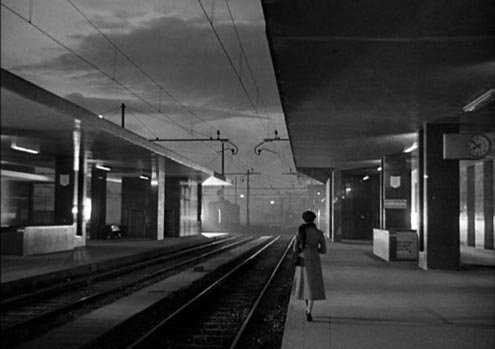 The busy station was only available to film crews from 10 p.m. to 5 a.m.
A

t the height of his fame, legendary Hollywood producer David O. Selznick hired Italian neorealist director Vittorio de Sica to make a movie in Rome. The result was a nightmare.

Selznick, the man behind such golden age classics as “Gone with the Wind” and “Rebecca,” looked to De Sica after two straight box office duds. The Italian’s gritty-looking films fascinated him. In his acclaimed 1948 “Bicycle Thieves,” De Sica had used minor actors and location filming to try to reflect the harshness of city life. His vision won him an honorary Oscar.

Selznick decided to pump $500,000 into a project that would star Jennifer Jones, his Oscar-winning wife, and acclaimed actor Montgomery Clift. The movie, “Stazione Termini,” released in the United States in 1953 as “Indiscretion of an American Wife,” remains among the first Hollywood-financed projects filmed in postwar Italy.

But the movie itself was a sappy and fragmented box office flop.

Not for lack of trying. Separate screenwriting teams, one for the Italian script and another for the English version, were set in place. Leading the Italian team was De Sica’s longtime collaborator, Cesare Zavattini, who imagined a series of lesser vignettes revolving around the main story of an adulterous Philadelphia wife, Jones, bidding adieu to her Italian lover, Clift, at a Rome train station.

The problems began early. Selznick hired and fired Southern novelist Carson McCullers, replacing her with Truman Capote who fleshed out a script based on Zavattini’s story. Strangely, Capote was billed as the film’s sole screenwriter even though he claimed to have written just two scenes.

Filming took place at Rome’s hulking Termini Station, rebuilt by Fascist architects in the late 1930s. Bustling with trains and travelers by day, the station was only available from 10 p.m. to 5 a.m. “We spent 75 consecutive nights without sleeping and barely eating,” recalled De Sica.

The language barrier was torturous from the get-go. De Sica spoke no English, only Italian and French, Clift spoke English and French, and Jones and Selznick only English. Translators became a constant and stressful presence.

After one scene saw more than 20 linguistic breakdowns, an exasperated De Sica invited an Italian actor to help Clift pantomime. The enraged Clift threatened to quit. A bit of broken Italian doodled on his script said it all: “Io arriva Italia, io una settimana strapazzato. Io due settimane pazzo.” — “I arrive Italy. I one week very tired. I two weeks crazy.”

Selznick talked Clift into staying, but he was also at war with De Sica. Selznick envisioned “Stazione Termini” as a happy-ending, Hollywood melodrama, but De Sica saw instead a doomed romance. A notorious micromanager fueled by a serious addiction to amphetamines and a staggering, five-pack-a-day cigarette habit, Selznick stayed up all night in the station tweaking the script, and churning out massive letters detailing his demands to De Sica. “I would agree with everything David said, and then do things my way,” De Sica confessed.

Clift, according to his biographer Patricia Bosworth, sided with De Sica and confronted Selznick, whom he called an “interfering fuckface” behind his back.

Exacerbating tensions was Jones, distracted by her two young sons being away at boarding school in Switzerland and the recent suicide of her ex-husband, actor Robert Walker. Jones had married Walker at 20, but soon after was discovered by Selznick. She left Walker for after the two began an affair.

Jones’s fragility seeped over into her lukewarm performance. She fought constantly with Selznick, once slapping him and breaking his glasses, another time fleeing the station, barefoot and in hysterics, as Selznick chased her down in his limo. The theatrics were legion. Jones so despised a mink Christian Dior hat that she was supposed to wear that she tried flushing it down the toilet. An exasperated De Sica told her that he could have made another “Bicycle Thieves” for what it cost.

Despite her demons, Jones tried to keep the peace between her husband and Clift. To help paper over the male rift, Jones gave Clift a Gucci briefcase, but the clasp was defective and it wouldn’t close. “Jennifer Jones gave this to me,” quipped Clift to his friends. “It’s beautiful but it doesn’t quite work — how like Jennifer!”

De Sica’s final version of “Stazione Termini,” generally considered a respectable neorealist endeavor complete with the requisite incidental characters and incidental incidents, clocked in at 87 minutes. After test-screenings for American audiences, Selznick decided that the movie, which preferred colorful vignettes of travelers and station bustle to melodramatic close-ups of the principles, looked “like a documentary.”

He butchered the movie down to 60 minutes for its U.S. release, eliminating subplots and external footage, splicing in close-ups, and re-christening it with its shock-value title, “Indiscretion of an American Wife.” To compensate for the paltry running time, a two-song prologue performed by Patti Page was added.

In the end, nothing could save Selznick’s corny, slapdash picture. Clift, who delivered a poignant and passionate performance despite the jarring misfortune of being the only “Italian” delivering lines in flawless, American English, called it a “big fat failure.” It bombed at the box office, and was universally lampooned by critics.

Eulogized film critic Bruce Eder: “As a movie, if ‘Stazione Termini’ didn’t exist to show how De Sica got it right, ‘Indiscretion of an American Wife’ wouldn’t even merit serious comment, possessing less depth than good television dramas of the same period.”