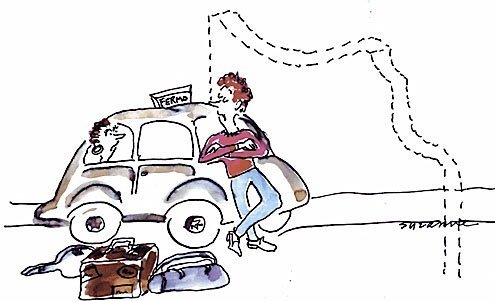 Maps with the Aurelian Walls are hard to find. Illustration by Suzanne Dunaway.
I

t’s May and you’re planning a trip Rome. You want information about cab fares between Leonardo da Vinci airport at Fiumicino and the city. Maybe you’re staying in a budget hotel in a little-known part of the city. Or maybe you’re just traveling heavy and don’t want the hassle of a train. So you click on the Aeroporto di Roma site (which spells “within” as two words — but OK, that’s better than your Italian). The airport site pawns you off to the official site of the City of Rome, or the Comune di Roma, where “additional and comprehensive information” is promised. You click on that and it takes you to page titled, “Fixed rates to and from the airport.” A hopeful sign until the page comes up reading: Questo contenuto non è attualmente visualizzabile — “This content is momentarily unavailable.” A week later and nothing’s changed.

Italy, you begin to think, is momentarily unavailable for long stretches.

But the missing content is fitting. Though Rome is one of Europe’s leading tourist destinations, white taxi service (Italian cabs are white) to Leonardo da Vinci, the longstanding national and international hub, and Ciampino, the smaller but exceedingly busy budget flight airport, can make you a character in a black comedy.

Beginning in October 2006, the City of Rome — which has long been at war with cab co-ops over licenses and prices — standardized airport fares. Trips to and from Fiumicino, it ruled, would cost a flat €40. The airport is about 35 kilometers from the city center. Travel to and from Ciampino, which is closer, would run €30. Express train service from Fiumicino to the city’s main railway station, Termini, which costs €11, would be unaffected.

During the negotiations, local cab companies demanded that the city lay down working limits for the flat fare. Modern Rome spans 20 square kilometers, said cab officials. Any flat fee had to be calculated so that drivers would average the same amount for trips to and from the center as they would for excursions to the far outskirts of town.

The two sides quarreled before reaching the most ambiguous possible solution: The airport flat rates would apply to travel to and from destinations within Rome’s Aurelian Walls.

The same Aurelian Walls ordered up by the Emperor Aurelian (not Aurelius) to defend Rome from barbarian attacks 1,735 years ago?

Not to be confused with the Servian Wall, built in 400 BC (after the first sacking of Rome by the Gauls).

Rome’s airport run has been problematic for years. Drivers tend to avoid faraway Fiumicino outside the morning and afternoon passenger rush. Milan’s circumstances are better, since its domestic airport, Linate, is well within city limits. Venice’s Marco Polo airport’s provides its own challenges but is shielded it from undue criticism by its unique lagoon location. In Paris and London, metered cabs shuttle back and forth between a dozen or so small and large airports in and outside city limits. Prices can be high, service erratic, and no nation is immune to hucksters. But the basic protocol is the same: You pay what’s on the meter.

Not in Rome. Or not always.

While making anti-barbarian barriers the touchstone for modern cab rides may seem like a nice, romantic touch, it’s also impractical, mostly because the once-stately brick walls no longer exist.

The gates that once led through them are more familiar by name to Romans than visitors: Porta del Popolo, Porta Salaria, Porta San Paolo, Porta Pia, Porta San Sebastiano. Most of them are now intersections or piazzas. In a few cases, near Piazza del Popolo for example, ruins of the actual Aurelian Walls are still visible. Chunks and stretches run near the Pyramid (just as bits of the Servian perimeter can still be seen near the Termini station). Of the original 19 kilometer Aurelian length, only a third is intact.

That’s not to say the walls are forgotten.

They remain reference points for archeologists and city planners. Books have been written about their Roman-era heritage. St. Paul’s Basilica even specifies itself as “outside the walls.”

This can be uncomfortable. All the more so when you consider that some tourists (and businesspeople) are in Rome only for hours.

For example, neither the Villa Borghese nor Villa Doria Pamphili, landmark parks, are within the walls.

What about the Vatican and Castel Sant’Angelo? Barely.

The Janiculum Hill? No. Same with most of the neighborhoods of Monteverde and the sprawling Nomentana.

What about the Pincio above Piazza del Popolo? Depends on whom you ask.

Good news for neophytes is that the Coliseum, Pantheon, Forum, and most of the city’s historic center are incontrovertibly within the invisible walls. So are most major luxury hotels.

The bad news is that countless budget hotels, many of them on the fringes of the city, are not. Most such hotels don’t let customers know their location ahead of time.

In theory, all a tourist would need to do is get a map — they’re available online and at kiosks — to locate his destination. Then again, how many tourists probe the city limits of a foreign metropolis? And how many are willing to challenge those who tell them they’ve got it wrong?

Arriving at Ciampino late at night is particularly thorny, since there’s no train service, only airport and local buses that run infrequently. Suddenly, the walls can be the difference between €30 and much more.

Catches abound. If you happen to board a white cab licensed in Fiumicino not Rome, the flat rate into the city is €50, not €40. Problem is, the cabs look alike.

Some guide books have dropped all pretense of explaining the Aurelian system and instead tell tourists arriving at Fiumicino board the Termini train into the city and consult with hotel or pensione employees before taking a cab to the airport. Budget hotels outside Aurelian limits often hire unregistered “limousine” services, enraging cabbies.

Cab drivers, meanwhile, turn on the meter regardless of the destination. Proof of their honesty comes only at the end of the trip, when they request payment.

Only about a third of Rome’s 7,200 registered cabs display a required flyer explaining the new rates. Fiumicino and Ciampino make no mention of it in the arrivals area, though some airlines do in pre-arrival videos. When New York City faced taxi cheating complaints in 1980s, officials ordered the distribution of rate cards to arriving passengers as they boarded yellow cabs. The system worked.

Complicating matters is the feud between the nation’s cab drivers and the Italian government, which has tried unsuccessfully to deregulate the protectionist industry. Cabbies went on strike in July 2006 and again in late May to protest the liberalizing of cab licenses. In Rome, Mayor Walter Veltroni’s proposal for 1,300 new licenses met with fierce resistance among drivers who perceived competition as a threat to their livelihood.

Last July, striking cabbies parked hundreds of cars in Piazza Venezia. The Independent referred to “Italy’s notoriously surly cab drivers.” Surly was the word. The strikes paralyzed the city center and the Fiumicino access road, until both the government and Veltroni city council backed off.

Cabbie officials based their protests on failure to rein in gypsy cabs, increases in small-business taxes, and hikes in gasoline prices. They said city traffic patterns were so badly managed that wait time cut into their profits. Adding licenses would dilute remaining profits.

These heartfelt if monopolistic complaints are hardly consumer-friendly. In the fall, the Rome daily Il Messaggero published a survey of the “most loathed” professionals in the city. Cabbies topped the list.

In March, Altroconsumo, an Italian consumer watchdog group, reported on 12 test cases in which Rome cabbies ignored the airport flat rate eight times. Other drivers applied the rate only when customers mentioned it. Some arbitrarily hiked the Fiumicino fee to €60 from €40.

But the finger-pointing only papers over flaws in the flat rate concept as currently conceived.

Rome residents complain that even good-natured and honest cab drivers are at times unaware of where the Aurelian Walls begin and end. Many are harried by traffic. Consumers and cabbies often find themselves on the same side and at a comic loss. For some drivers, relying on meter rates means avoiding a call to the dispatcher for Aurelian details. It also bypasses embarrassment.

Ironically, the current system may be more maddening than the one it replaced.

Until last year, cabs had two fare structures depending on whether travel was within or outside the Rome ring road (grande raccordo anulare), with prices higher outside. Drivers trawling to and from the airports had to manually adjust the meter when they crossed the raccordo. Some did this dutifully, while others forgot — intentionally or otherwise. Passengers unaware of the procedure complained that the driver was manipulating the meter. The awkward system led to frequent disputes.

In one respect, the Aurelian Walls alternative is far more egalitarian: It confuses everyone.

INSIDE OUT: A personal experience

Last week, I phoned for a cab to Ciampino. I live near Piazza di San Pancrazio in Monteverde, or within the Aurelian walls.

Since last fall, Rome cabs have charged a flat fee to and from its two airports, Fiumicino (€40) and Ciampino (€30).

“If you are inside the Aurelian Walls,” said the dispatcher.

It just so happens a segment of the ancient walls is 100 meters from my apartment.

Why not walk the 100 meters to the wall to save being overcharged?

“Signora, let me confirm that,” said the dispatcher.

“No, signora, that address is not within the Aurelian Walls.”

Phase two. I asked the dispatcher for a location near my address that was within the walls.

Another 10 minutes of elevator music.

“Signora, you would have to go to the Coliseum.”

Later, I called Radio Taxi 3570 to better understand the situation. They confirmed that San Pancrazio was in fact inside the Aurelian Walls. The original dispatcher was incorrect.

According to a spokesman, the limits of the walls are often difficult to ascertain, particularly in the northern neighborhoods of Prati and Monteverde, where some areas are inside them and others are not.

In fairness, some cab companies do respond to formal complaints. When my parents were billed €65 from Fiumicino to the center of Rome, I sent a fax reporting the overcharging.

My observant brother Brian helped out: White station wagon taxi, furry yellow dice dangling from the rear-view mirror, driver in his early 30s wearing an expensive-looking beige corduroy jacket with a thick fur collar. We put this all in the fax.

A month later, a representative from Radio Taxi 3570 appeared at my office with a €20 refund. “We apologize for our colleague. His license has been suspended for two months.”