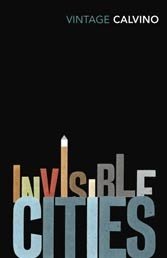 By Italo Calvino, translated from the Italian by William Weaver

magine a thermal bath situated inside a Saharan sand dune and you might begin to fathom this visionary oasis of a book, a prose poem chit-chat between China’s Kublai Khan and Marco Polo about the cities the Venetian either visited or chose to invent while on his travels east (“My mind goes on containing a great number of cities I have never seen and will never see…”). In such acreage the “… zodiac of the mind’s phantasms” transforms cities into states of mind and memory that help create an affinity between the bored master, Khan, and the eager traveler, Marco, each one eager to conjure up worlds to give life meaning. One fills in what the other thinks to dream. Marco misses Venice, or so Khan thinks, and uses “the labile mists of memory” to create dimensions into which cities fit. Khan, Marco knows, is bored by his immense power, encouraging the Italian to make his remembered cities into metaphorical provocations that straddle the ancient and modern, the living and the dead.

Calvino’s Marco is confident as a crypto-cartographer, a quiet Vishnu who plays urban planner of the surreal, a maker, Khan says, of “filigree cities to be seen through their opaque and fictitious thickness,” places where commas and parenthesis have accents, where polyhedrons, incunabula, hircocervi, the Greek and Latin shapes and things, compete for space; where what is, was and will are in equipoise.

There is the city of Sophronia and its “Ferris wheel of spinning cages,” “clump of trapezes” and “petroleum refinery,” a half-metropolis with Futurist nooks that is annually resculpted. In Eusapia, skeletons gather to play little trumpets. In Esmeralda, the shortest distance between two points is a “zigzag that ramifies in tortuous optional routes.”

Calvino storms into Coleridge territory and emerges with starstruck lyrics entirely his own. “It is not the voice that commands the story,” says Marco, “it is the ear.” And the ear is rapt.