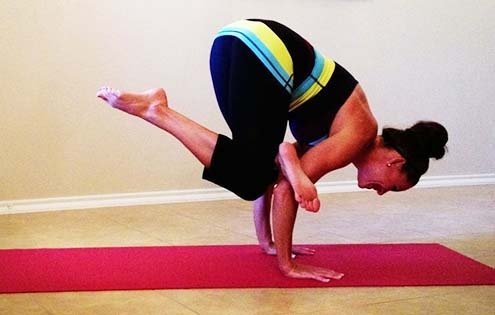 Do poses equal posing? You be the judge.
S

omething is off. I roll around in my bed but I can’t shake this weird feeling that material touching me isn’t what it should be. It feels… tainted somehow.

Whatever. But wait, it’s not whatever. It’s more. The longer the material stays in contact with my skin, the more this unpleasant aura escalates to something full-on disturbing.

I jerk upright in bed, unable to ignore it anymore. I can’t explain what, but something propels me to check the material label of my sheets. It reads “100% cotton.”

That’s when the full horror of the situation hits me. It’s cotton — just cotton. It’s not organic! I’ve been sleeping on threads whose manufacturing doesn’t fall under the category of “low environmental impact.” But — if you can believe it — what’s even more upsetting than the torture I’ve inadvertently inflicted on Earth is the realization of what’s happened to me.

I look down at my hands. They are perfectly moisturized with sustainable, locally sourced cream. Overnight, I’ve morphed into an LA girl. I should have known it was coming. After all, I’m determined to move there in a few months.

The non-organic sheets are so devastating to my perfectly calibrated body that I need to get out of bed. As I do, I reflect on how I got to this point. What tipped the scale to make me become this nearly unrecognizable monster?

Perhaps my destiny was sealed as far back as January, when I signed up for the gym, and instead of going to a TRX, Navy SEAL approved workout, I chose Vinyasa Yoga. And not just any yoga class, but one that started at the ungodly hour of seven in the morning, requiring me to wake up at 6:40.

Don’t judge, this is a safe space, but waking up before seven somehow justified my feelings of superiority — after all, I was waking up before the Great Cut Off acknowledged by health nuts and normal people alike.

Since January, I’ve taken almost exclusively yoga or Pilates classes. In jargon, I’m my own enabler. My yoga practice has grown to include the Dragon pose, the Flying Monkey God pose, the Crow pose, and even a headstand.

These might seem to you like mild LA symptoms, not enough to qualify me as a full-blooded LA girl — maybe just a NYC girl. But if you think that you’re wrong.

I now own a yoga mat. I have developed a mantra. I have entered yoga brand giveaways. I’ve even memorized parts of my teacher’s routine (“A human falls out of a pose, a yogi gets back in.”)

I work out daily, rain, shine, or snowstorm. My eating habits have changed. Meals that used to focus on pasta now orbit around a piece of locally baked sourdough bread topped with organic avocado that I mash up, place on the toasted slice, and cover in freshly squeezed organic lemon, organic olive oil, salt, pepper, and organic chili peppers.

Still think this isn’t enough to qualify me as an LA girl? How about the fact that I douse the whole green beast in chia seeds?

But I don’t want to mislead you. Honesty is my watchword. It’s not that eating an avocado here and there converted me. It was following the official LA food routine daily. That, and supplementing it with its drink equivalent, kombucha. Kombucha is fermented tea.

It gets worse. My preferred kombucha flavor is “Power Greens.” It’s green because it contains LA super foods including but not limited to kale.

Never mind that it tastes like sparkling cider. It’s healthy! And I when I don’t have time for “avotoast” I even make myself smoothies.

You mortal fools who think that mine is a simple case of eating well are wrong. It goes beyond just eating. I’ve also started taking a natural supplement: charcoal pills! Two of them, 30 minutes before a meal, and two more 30 minutes after. Yum. LA health practices have engulfed me.

I spritz my face every morning with rosewater after massaging its muscles with a jade roller.

My clothes? You guessed it: I’ve been buying largely vintage jeans and t-shirts since July.

My bag? I got it from two guys in LA who make leather goods on an eco-friendly scale.

Want to know the worst thing of all — the one true indication that I’m beyond saving? I really like my new lifestyle. I know how that might sound — living a healthy life and actually enjoying it. Like bragging.

Then again, what’s a transformation if you can’t sound smug about it?