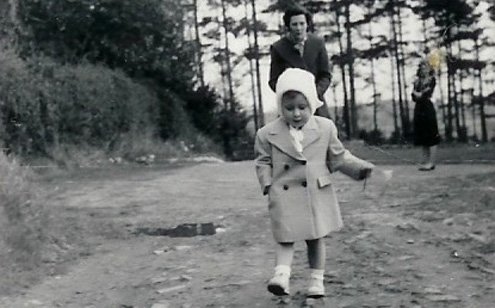 Me, Mum and Auntie Val on a stroll, England, 1954. I inherited the hand-in-pocket habit from my Gram.
I

walk. As a child, my English mother walked my brother and me along the lanes near her village in East Sussex. She named the trees, shrubs and flowers. She told us about the hedgehog and dormouse that we could find in the hedges. We picked sloes from the blackthorns for my grandmother to make sloe gin.

When we moved back to Canada, we lived in small towns in New Brunswick and Nova Scotia. My mother would stroll with her friends back and forth from one house to another and back again while we children ran ahead and looked for tadpoles in the river, turned over rocks to look for squirmy things or, in winter, slid down icy slopes until the trees cast long slanted shadows in the mauve afternoon and the mothers had to get home to “start supper.”

“I’ll walk you back again.” They laughed.

“Now, I’ll walk you part way.” They had to finish their story.

For me, walking became part of visiting, of spending time with friends, when you talked of anything and it didn’t seem like idling — because you were walking.

My Canadian father took us berry picking and for walks in the “bush,” the forests of northern Ontario where we later lived. The green was a darker green than that of the east coast of Canada.

The northern woods had a wild odor of urine and lichen and moss, of the bogs and marshes we called muskeg with its decaying, overgrown vegetation. It was wilderness but it was not empty for there were butterflies, birds cawing, squirrels and chipmunks scampering away and keener eyes watching in silence. For those animals, my father taught us to look their signs — a burrow, a paw print, scratches on trees.

“Look round before you pick. A bear might want to have you for dinner, especially if you’re stealing his blueberries.”

We walked in; we walked out. We didn’t meet another soul. We didn’t call it hiking then.

Later on I moved to Ottawa and Toronto to study and work. The forests and lakes of the north called me home for the holidays but those were years of cities and high heels rather than hills and hiking boots.

When I moved to Milan in the north of Italy with my Italian husband eighteen years ago, I was introduced to the mountains. Marino was born near Modena in the region of Emilia in the Apennine mountains that run snake-like down the backbone of Italy from Liguria on the northwest coast to Calabria in the south. His family still has an old stone house there.

Usually Marino and I take day trips to the mountains near our home in Milan. On clear days, the Alps that almost surround the city are visible. Sometimes we go with a hiking association and guide, sometimes with friends, occasionally alone. We explore the regions bordering Lombardy — Piemonte, Liguria, Veneto and Emilia-Romagna.

We hike to get out of the city and its pollution. For us, it is therapy. We walk off our stress, breathe in the fresh air and absorb the quiet and beauty of another Italy, of places that need to be approached at a self propelled, human speed of itinerant peddlers and pilgrims. There is a simple pleasure in putting one foot in front of the other at a pace that allows the mind to fall into rhythm with the senses and to be aware of only that which surrounds you at the moment.

Hiking doesn’t have to be synonymous with mosquitoes, endless forest trails and heavy backpacks or with sleeping on damp ground in order to commune with nature. In Italy it can be an entirely different concept. There are millennium of footpaths, donkey trails and abandoned Roman roads. It is, at times, clambering up and down mountains, but every few miles there’s something to see — a village or hamlet, a view to admire, a history to learn, a plant to study, a geography to explore.

There is wildness in Italy. There is wilderness, too — and the possibility to trod lonely trails and mountain crests from rifugio to rifugio for days. But those mountain shelters offer hospitality, hot showers and dinners of such pleasure that it becomes one of the reasons you walk.

There are some practical things to consider for a good hike: appropriate waterproof boots, drinking water, maps, sun screen and rain protection for you and your backpack.

Mountains can be dangerous. Even in Italy, mother nature can quickly become taciturn. Respect Her, or she will kick you in the face.

Be it a day trip or a ten-day hike, after hours of movement, along the path there’s a village with a bake shop, a trattoria with local dishes, or a cafè with a cold beer and ice cream to soothe the aches and pains and help finish the journey. There are fruits, berries and chestnuts to gather on the way — and sloes if you know where to look.

— Follow these links to hiking associations in Italy. Some, not all, have English-language sections: Club Alpino Italiano; La Montagna Incantata; Trekking Italia; Zaino in Spalla.