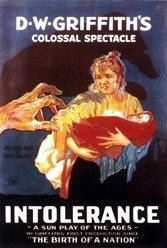 D.W. Griffith’s “Intolerance” has artistic affinity with Dutch artist Hieronymus Bosch’s epic and grotesque 15th-century painting “The Garden of Earthy Delights,” a sprawling and macabre triptych vision of the afterlife. Bosch, attentive to the grotesque, left no allegory to chance: his heaven and hell seem like kindred spirits. While probing 1915 America through a Christian lens, silent filmmaker Griffith attempts much the same in his 2,500-year history of unfairness. Over nearly four hours, his vast canvas juxtaposes four parallel stories set in Persian, Biblical, medieval, and contemporary times, each one a relentless and often overwrought effort to demonstrate the rift between rich and poor, between modesty and lewdness, between charity and greed, between compassion and hypocrisy.

In ancient times, intolerance does in first quarreling Babylon and Persia, then Jesus himself. Centuries later, Enlightenment values fail to stop Catholic-Protestant butchery. Finally, in contemporary America, corporate barons rule aloofly over have-nots, forcing them to the criminal margins of society with ruinous consequences for all. Griffin glues together his tableaus with an image of Eternal Motherhood (Lillian Gish, rocking a cradle) in plus ça change, plus c’est la même chose style. The result is at once cumbersome, striking, tedious, and breathtaking: it’s cast-of-thousands dramatic opera that at no time gets enough of itself. The moderns of the story don’t have names but labels: “The Boy,” “The Dear One,” “The Musketeer of the Slums”; they are characters as archetypes in the service of social messages.

Interestingly, the film is intensely female — with Constance Talmadge often stealing the show as the tomboyish Mountain Girl (she has two roles). Though the story’s conflicts are inevitably male-driven, it is women who pay the price in subjugation, prostitution, and both precocious and precarious maternity.

Most morality is a preachy lie, and Griffith himself a self-aware cinematic preacher, biases included. Still, aspects of his gospel still make striking human and visual sense a century later. It’s easy to understand why Charlie Chaplain called him “the teacher of us all.”