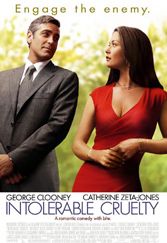 Joel Coen’s black-hearted romantic comedy about divorce law and pre-nups is surprisingly stilted and arid. All the trademark Cohen quirks and quicksilver banter are present and accounted for, but the movie’s warped bouts of zaniness (Geoffrey Rush steals the opening five minutes) get little help from its frigid characters — and this despite tons of star-power.

Though it tries oh-so-hard to earn entry into the 1930s screwball pantheon, the project falls woefully short. That’s mostly because Clooney and Zeta-Jones — despite an array of one-liners — are all spill and shills, toy soldiers in the Cohen cause. Out-of-synch Zeta-Jones does little more than spoof an extended cameo. Not this time, boys.