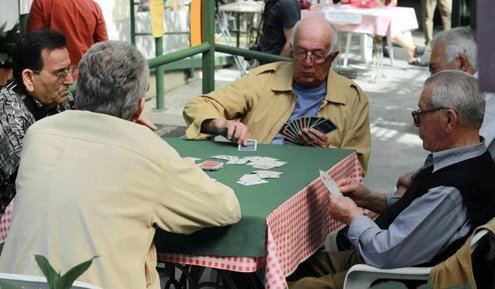 At work in Palermo, where there is no commanding Hapsburg legacy.
W

hen the Iron Curtain fell in the late 1980s, Italy was seized with excitement about the rediscovery of “Mitteleuropa.” Mitteleuropa is the part of central Europe that once formed the backbone of the Austro-Hungarian Empire. It enjoyed short-lived post-World War I autonomy before falling under Soviet control. After 1989, Czechs, Hungarians, Poles, Romanians, Slovenians and northern Italians awoke to lost ties and a shared cultural heritage. Intellectuals and separatist groups such as the Lega Nord downplayed Austria’s onetime role as a loathed colonial oppressor and military enemy, using old connections to tout a past that acceptably distinguished Italy’s north from its south.

Mitteleuropa’s enthusiasts had a point. Milan can look very much like Vienna and the two cities vie for credit over the origins of the breaded veal cutlet known south of the Alps as cotoletta Milanese and to the north as Wiener schnitzel. Friuli is famous for its slivovitz plum liqueur, also a Balkan favorite. Austrian Empress Sisi built a fantasy castle near formerly Austrian Trieste. Bohemian poet Rainer Maria Rilke’s wrote the “Duino Elegies,” considered some of his finest work, near cliff-side Duino on the Gulf of Trieste.

Not long ago, I left behind Mitteleuropa and flew from cold and rainy Milan to Palermo. Outside the Punta Raisi airport north of the city the sun blazed and the bougainvillea bloomed. There are times when Italy makes sense as a geographical nation while sorely testing the idea of the nation state. It’s hard to believe Milan and Palermo are in the same country.

Milan may be in Mitteleuropa, but Palermo — and Sicily itself — is in an equally amorphous cultural and geographical entity I call “Mediterranea.” With no clear borders and great ethnic variety, how can you tell you’ve arrived in Mediterranea?

First, you feel it. The sun is hot.

Then, you smell it: Mediterranea’s air is perfumed by orange flowers, honeysuckle, sandalwood, hemp, diesel, garbage, frying food, and often the sea itself.

The flora: Fig trees grow in vacant lots and bear fruit no one seems to want. Citrus comes in all forms. Acanthus, as a tough, spiny weed and the crowning motif of the Corinthian column is ubiquitous; so is oleander. Weeds root in downspouts and roots crumble old walls.

The fauna (animal): the occasional donkey dozes between cart traces; dogs — generic and apparently ownerless — take themselves for walks or flop in the sun. Cats come in legions — definitely ownerless.

The fauna (human): Men sit at tippy street-side tables; they do nothing definable or play cards. Children play in the street; young couples twine around a motorcycle and kiss. Weathered women of indefinable age — 30 or 60? — carry superhuman burdens, real and metaphorical.

Celebrations: There is always something on in Mediterranea; a first communion, a funeral and probably a wedding. Weddings are key in Mediterranea, where banquet halls line country roads and the sale of wedding garb can dominate an entire neighborhood. No matter what the event, a paper-wrapped tray of pastries dangles from a ribbon in some guest’s hand.

In Mediterranea all transport is mass transport. The headcount of buses, cars and motorcycles invariably exceeds the manufacturers recommended limit.

Commerce: Trade in Mediterranea ranges from hyper-specialized to schizophrenic. Only in Mediterranea are there entire emporia dedicated to various varieties of a single cooking utensil, article of apparel or produce. Where else are roadside stands stacked with just citron or carrots or melons? Then there are utterly incomprehensible merchandise mixes, usually including cigarette lighters. In Mediterranea you can sell the unsellable — used; refurbished mufflers or patched tires.

Commerce probably created Mediterranea. Its typical city is usually a port or a crossroads; a place where Phoenicians traded glass and Carthaginians traded dye. Greeks sold wine, olives and oil. Romans brought tin from Britain; Arabs brought silk from China; Venetians and Genoese brought whatever made money. And everyone brought their religion.

“Mediterranea” is more than the rim of the sea that gives it a name. Mediterranea fans out across Turkey and trickles along the coast of the Black Sea. It goes from Gibraltar to Kabul; bits of Mediterranea are found in Manila and Bombay.

But whether you’re in Bagheria or Bolzano, Palermo or Pordenone, Mediterranea or Mitteleuropa, the sound of espresso cups clinking will remind you never left Italy.